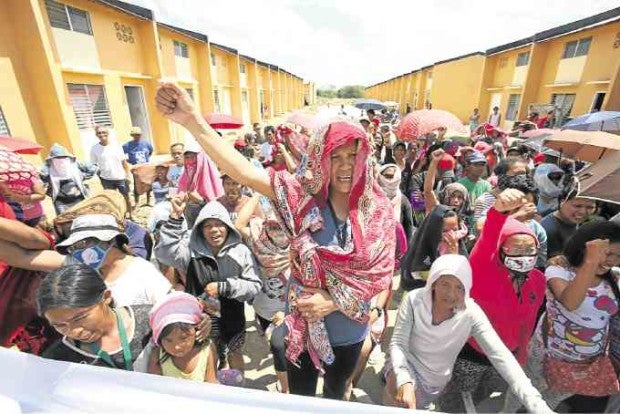 The local government of Pandi town in Bulacan province had found itself swamped with a national government problem — 20,000 people claiming they were homeless and now occupying previously idle government-built houses and demanding basic services, too.

Town officials said key to keeping the settlers from saddling the local government with additional demands for its limited resources are jobs.

But Pandi Mayor Celestino Marquez said that for the local government to be able to provide employment to the settlers, the national government had to step in.

Marquez said the national government’s refusal to evict the settlers, belonging to the left-wing urban poor group Kalipunan ng Damayang Mahihirap (Kadamay), had given the town a problem with solutions that would be beyond the means of the local government.

“We have inherited them but they need to be provided social services and the opportunity to earn a living,” the mayor said.

Training but no jobs

“That will happen if we have good roads that will be attractive enough to draw investors,” he said.

“What will livelihood training do for them if there are no opportunities available here,” he added.

Members of Kadamay last month occupied empty units in government housing projects for soldiers and policemen in Pandi, demanding that the houses be given to the settlers for free.

Threats of eviction melted when President Rodrigo Duterte, in a speech, announced he was letting the settlers stay because he did not want violence to erupt if the settlers were forced out of the units. He told soldiers and policemen for whom the houses were built to wait for better and bigger houses.

But for the town of Pandi to keep the settlers content, Marquez said the national government should help bring in investments that would provide jobs for the Kadamay members.

The national government, the mayor said, should connect Pandi to the North Luzon Expressway through a proposed 9-kilometer bypass road that would link another bypass road in Plaridel town through an industrial site in the Plaridel village of Bagbaguin.

The roads of Pandi, said Marquez, were damaged by equipment used to build 11 government housing projects in the town.

The proposal to build the Pandi bypass road had been submitted to the Central Luzon regional development council.

According to Marquez, the development of housing relocation sites has increased the town population to 170,000, including the Kadamay members.

The town receives P189 million in internal revenue allotments (IRA), which represents its share from taxes collected by the town on behalf of the national government.

But at least 60 percent of the IRA are for salaries of town employees, leaving only 40 percent for social services, Marquez said.

He said Pandi had only two ambulances, two fire trucks and one garbage truck.

Pandi is known for producing fabric for “barong tagalog” and “baro’t saya” that are sold in Metro Manila markets.

The occupation by Kadamay members of vacant government-built houses has drawn the attention of senators.

One senator, Juan Edgardo Angara, said the solution to the housing shortage that the Kadamay occupation had put in the spotlight lay in a bill that he filed seeking to create a “super body” for housing.

Angara, who chairs the Senate finance committee, said in a statement that his bill, which would create yet another government agency to oversee housing programs, should be given priority by the Senate in the wake of what happened in Pandi.

According to Angara, DHUD’s main objective would be to deliver, with private sector help, affordable and decent housing for all Filipinos.

The senator said when he filed the bill late in 2016 that the shortage of housing units stood at 3.9 million and was expected to grow further and reach 6 million by 2030.

In his statement, Angara said the government would need to build at least 345,941 units a year if the backlog is to be filled through what he said was “an integrated approach.”

He said, though, that while DHUD would be the lead agency in housing and urban development, it would not be a “do-it-all” office.

“It shall be the sole and main planning and policy-making, regulatory, program coordination and performance monitoring entity for all housing and urban development concerns,” Angara said.

He said DHUD’s main focus would be on “access to and affordability of basic human needs” that included housing.

The proposed department, he said, would work in coordination with local governments. —CARMELA REYES-ESTROPE AND JEANNETTE I. ANDRADE