Why not decriminalize drug use? VP urges gov’t to study Portugal move 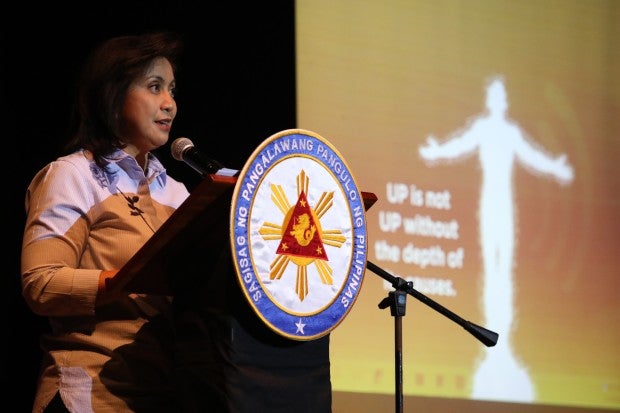 Is decriminalizing drug use the better alternative to killing drug addicts?

Vice President Leni Robredo suggested on Friday that the Philippines look to the example of Portugal, which made the radical decision of decriminalizing drug use in 2001, leading to lower drug-related deaths and declines in drug abuse among its citizens.

Robredo was the guest at a forum in the University of the Philippines in Los Baños when she was challenged by a student to offer an alternative to the government’s deadly drug war, which has left thousands dead since last year.

She said the government should study the best practices by countries that found solutions to the drug menace, and cited Portugal as a “triumphant” example, according to a transcript of the exchange sent by her staff.

Robredo did not directly propose following the Portuguese government’s policy of decriminalizing drug use, but noted how the European nation dramatically shifted its focus from looking at drug abuse punitively to treating it as a health issue requiring treatment and reintegration.

She contrasted it with the failed drug campaigns by state forces in Latin America, most of which had focused on violent methods.

“If we only study the drug campaigns around the world, we will see that the countries that used violence in combating drugs never succeeded. Venezuela, Colombia, Mexico —these countries used force, they fought fire with fire. Many lives were lost but they were not successful,” she said in Filipino.

“Who were successful?” she asked the students.

“One of those is Portugal. What did Portugal do? Portugal found a system to combat drugs that was peaceful and orderly. They reformed their laws; they strengthened rehabilitation [of addicts]; they fixed their institutions responsible for rehabilitating.

“They were triumphant,” Robredo said.

Portugal decriminalized personal possession of all drugs in 2001.

This did not mean possessing drugs for personal use became legal, but rather, it was considered an administrative violation punishable by fines or community service.

According to the Transform Drug Policy Foundation, Portugal registered lower drug use levels than the European average since the decriminalization policy took effect in 2001.

Drug use also declined among those aged 15-24, the population most at risk of initiating drug use, the UK-based group said in a 2015 report.

“Overall, this suggests that removing criminal penalties for personal drug possession did not cause an increase in levels of drug use,” the foundation said. It noted, however, that besides decriminalization, Portugal instituted corresponding social and health reforms that aided the new drug policy.

“This tallies with a significant body of evidence from around the world that shows the enforcement of criminal drug laws has, at best, a marginal impact in deterring people from using drugs,” it said.

In the UP forum, Robredo said it was important to learn from the experience of other countries facing drug problems.

“Why don’t we look at the best practices and try them, because we have enough lessons in the past from other countries to determine what works and what doesn’t,” she said.

She said she wished to pursue community rehabilitation for drug dependents.

“Many of those who surrendered were not really drug dependents but occasional drug users. Why don’t we create a program for them?” she said.

Robredo noted how congested Philippine jails were, with more than half of the inmate population incarcerated for drug-related offenses.