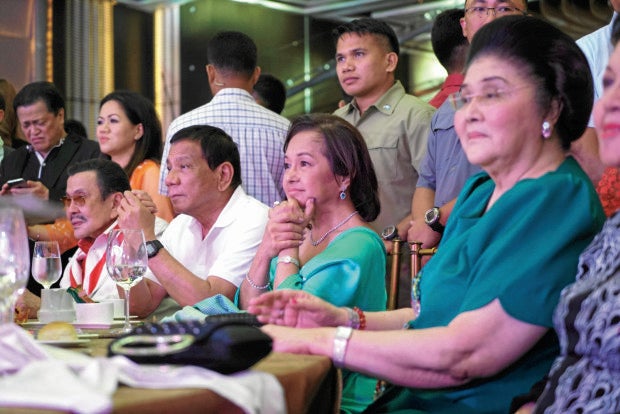 Photos released by Malacañang showed Mr. Duterte and Estrada seated beside each other. They shared light moments, according to the Palace.

Jinggoy is detained on graft and plunder charges that stemmed from alleged misuse of his allocation from the Priority Development Assistance Fund, a pork barrel that the Supreme Court had struck down as unconstitutional.

Also spotted at the party was former Sen. Juan Ponce Enrile, who, like Jinggoy, is facing graft and plunder charges in connection with the pork barrel scam, allegedly masterminded by businesswoman Janet Lim-Napoles.

Enrile is out on bail.

Estrada’s other guests included former Vice President Jejomar Binay—who is  accused of graft and corruption in the Office of the Ombudsman for alleged overpriced contracts during his long term as mayor of Makati City—former Speaker Jose de Venecia Jr. and Sen. Manny Pacquiao.

A Palace statement said Mr. Duterte, aside from greeting Estrada, talked about his plans for the country, including eliminating graft and corruption, and the scourge of illegal drugs.

Mr. Duterte said he would let his economic managers improve the country’s economy, adding that his Cabinet included brilliant, clean and honest men.

He spoke as well about this administration’s peace talks with communist rebels, and warned of the threat posed by Islamic extremists.