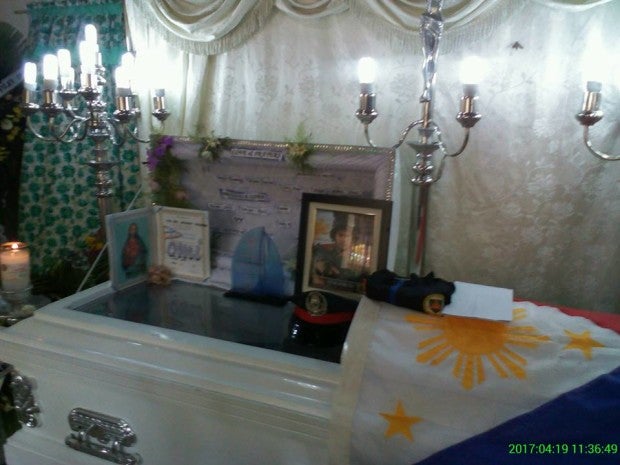 CALAPE, Bohol – Muddy road stopped President Duterte from attending the wake of the lone policeman killed in an encounter with the Abu Sayyaf members in Inabanga town, Bohol, last week.

“The recognition is due him. He did a good job,” he later told reporters in Cebu City.

Mr. Duterte was in Tagbilaran City on Wednesday afternoon to attend a security briefing with police, military, local and Cabinet officials on the clash with the Abu Sayyaf in Inabanga and the ongoing Association of Southeast Asian Nations Summit (Asean) meetings in Panglao.

After the meeting, the President was supposed to visit the wake of Nazareno in Calape, about 41 km from the capital city of Tagbilaran and less an hour away by private vehicle.

Mr. Duterte told reporters that the military advised him not to proceed because the helicopter would have difficulty landing in the village since the area was muddy.

Barangay Ulbujan where the Nazarenos live is about 3 km from the national highway.

Mr. Duterte stayed in Tagbilaran for at least three hours before going to Manila.

A day before the supposed visit, members of the Presidential Management Staff went to the house of the Nazarenos and brought a funeral wreath and cash assistance from Malacañang.

Nazareno, 30, and the youngest in a brood of four, was one of the four government troopers killed during a clash with the suspected members of the Abu Sayyaf in Barangay Napo, Inabanga.

He was killed less than a month after completing his training at the Special Weapons and Tactics (SWAT) last March.

Four members of the bandit group were also killed including their leader Abu Rami.

Gurrea said Dela Rosa stayed in the wake for an hour before going back to Tagbilaran where he had dinner with Bohol Gov. Edgar Chatto at the Governor’s Mansion.

He then proceeded to the port in Tubigon town where he took a fastcraft to Cebu City so he could take an early morning flight to Manila.

In an interview with reporters in Cebu City, Dela Rosa said the family was proud of what their son did for the country.

“Although the family grieved the loss of a loved one, they are still proud that he (Nazareno) offered his life for the country,” he said.

“Losing one’s life is part of the life of a policeman’s life. We just have to be careful,” he added.

Dominador, 61, said he thanked the government for the assistance.

“Wala ko nagmahay nga namatay akong anak tungod kay nakasilbi siya sa atong nasud. Ang among hangyo lang sa Presidente nga mahurot na unta nang mga Abu Sayyaf (I didn’t regret that my son is dead because he was able to serve the country. My appeal to the President is that he finishes off all members of the Abu Sayyaf,” said Dominador.

Read Next
Palace: Duterte plan to arm civilians a ‘dramatization,’ not a policy move
EDITORS' PICK
Smart celebrates all kinds of ‘#SimplyLove’ for Pride Month
Duterte to issue memo on face shields this week
Smart brings KCON:TACT especially 4U to subscribers from June 19 to 27
Gilas out to prove Korea win not a fluke; Tab fires back at ‘lucky shot’ remark
DOH reports 40 more COVID-19 variant cases
Young, Huerter help Hawks upset top seed Sixers in Game 7
MOST READ
Duterte to issue memo on face shields this week
No plot to oust Pacquiao as PDP-Laban president in July meeting — Nograles
Probe troll farms, lawmakers urge
Año: Drug war to be effective no matter who next leaders are
Don't miss out on the latest news and information.