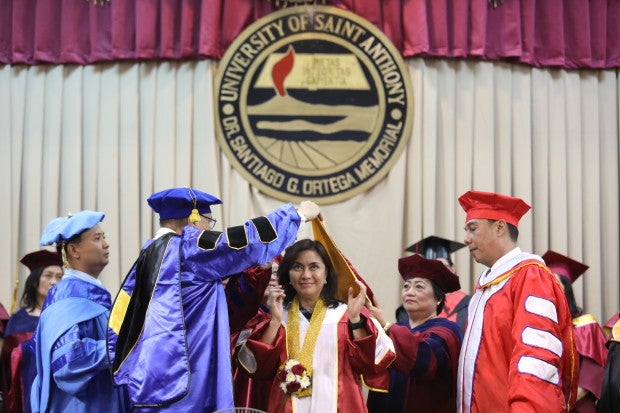 Vice President Leni Robredo receives the Doctor of Humanities Honoris Causa during the 70th Commencement Exercises at the University of Saint Anthony at San Miguel, Iriga City, Camarines Sur on April 19, 2017. PHOTO FROM THE OFFICE OF THE VICE PRESIDENT

The University of Saint Anthony conferred the Doctorate Degree in Humanities, Honoris Causa on Robredo during the 70th Commencement Exercises in San Miguel, Iriga City on Wednesday. Camarines Sur is the Vice President’s home province.

“It is with deep gratitude and humility that I accept the honorary degree of Doctor of Humanities that this University has conferred on me,” Robredo said in her speech.

The UP community has slammed the decision of the university’s Board of Regents to grant a doctor of laws degree to President Duterte.

UP students, faculty and alumnus were protesting the plan because Duterte should be called to account for thousands of extrajudicial killings in his bloody drug war.

But Duterte said he will decline the award.

READ: Duterte says no to UP honorary degree

“With due respect to the University of the Philippines, I do not accept, even when I was mayor,” he said in an interview while in Bohol province on Wednesday.

“As a matter of personal and official policy, I do not accept awards. It’s not in my nature,” he said. JE/rga

Read Next
Polar bear dies after ‘best friend’ moved to another zoo
EDITORS' PICK
Over 3 Million worth of prizes to be won at Smart Padala’s SENDali Manalo Promo!
‘Not yet the end’: Lawyer says Marcos Jr’s DQ cases to take lengthy process
Critical scenario: 3 Comelec vacancies just 3 months before elections
Acer starts the year off strong with the Aspire Vero National Geographic Edition
The best of bayside and city living at SMDC’s Sail Residences
PH logs 37,070 more COVID-19 cases; over 33K others recover
MOST READ
Duterte asks: ‘Is COVID-19 airborne?’ Duque blames spread on ‘token compliance’ with rules
Morissette Amon recovering after confinement for diverticulitis, tests positive for COVID-19
‘Not yet the end’: Lawyer says Marcos Jr’s DQ cases to traverse lengthy process
Marcos camp ‘extends hand of unity’ after COC cancellation bid is thrown out
Don't miss out on the latest news and information.