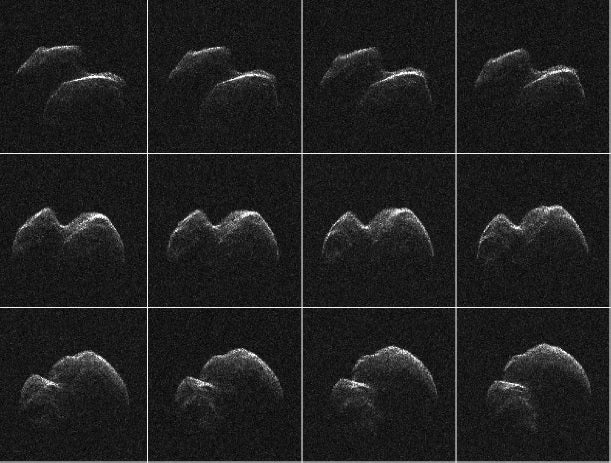 PARIS, France — A peanut-shaped asteroid 1.3 kilometers (3,280 feet) across streaked past Earth on Wednesday, giving astronomers a rare chance to check out a big space rock up close.

But not too close.

Dubbed 2014-JO25, the asteroid came nearest at 12:20 GMT and is now hurtling away from the center of our solar system, said Ian Carnelli, an astronomer from the European Space Agency (ESA).

READ: Large asteroid in near miss with Earth on April 19

“It does not represent a danger to our planet,” Carnelli told AFP, noting that the asteroid passed within 1.8 million kilometers (1.1 million miles) of Earth — about four times the distance to the moon.

The Arecibo observatory in Puerto Rico — which has one of the world’s biggest radio telescopes — captured the 2014 JO25’s first images, showing an object that is likely “two large asteroids that fused together”.

The space projectile will remain visible to onlookers equipped with a telescope in the northern hemisphere on Wednesday night.

Herewith, a little primer on near-Earth asteroids and the danger they pose (or not).

You may not see them, but space rocks whizz above our heads all the time.

Patrick Michel, an astronomer at the Cote d’Azur Observatory, estimates that an average of 10,000 to 100,000 tons of spatial material come into our general neighborhood each year.

But large asteroids passing this close to Earth remain a rarity.

“The next one will pass by in 2027, a 800-metre long object that will come within” one Earth-to-the-Moon distance, he said.

The last time 2014-JO25 was in our vicinity was 400 years ago, and its next close encounter with Earth won’t happen until sometime after 2600.

2014-JO25 does not represent an immediate danger. But it does fall within the category of “potentially hazardous asteroids” that astronomers monitor for safety, Pascal Descamps, an astronomer at the Paris Observatory told AFP by phone.

Any space rock at least one kilometer (0.6 miles) across that travels within 7 million kilometers (4.3 million miles) of Earth qualifies.

The good news is that scientists have identified at least 90 percent of these flying hazards within our solar system.

“There isn’t a single one that threatens us in the short term, meaning in the next few centuries,” Michel said.

“There are thousands of asteroids larger than one kilometer,” he added. “The frequency with which they could hit us is once every 500,000 years, so we are facing a risk that is very low.”

Many sizeable asteroids have crashed into Earth or exploded in our atmosphere, leaving behind massive craters — and clues as to their composition.

And 65 million years ago, an even bigger asteroid slammed into Earth a little further south, leading to the extinction of non-avian dinosaurs.

A one-kilometer asteroid hitting our planet today would be like “a million Hiroshima bombs,” Michel said, and trigger the extinction of roughly a quarter of all species.

“A 10-kilometre object… would provoke the extinction of our species,” he added.

What can be done?

To prevent such a catastrophe, a team of astronomers from NASA and the European Space Agency have drawn up plans for a live test in space: deviating a potentially deadly asteroid.

An self-guided 400-kilo satellite — hurtling at six kilometers per second — would target an approaching asteroid.

The objective would not be to destroy the object, but to deflect it, since fragments could then crash into Earth. A target has been selected.

So far, however, funding has not been approved. CBB