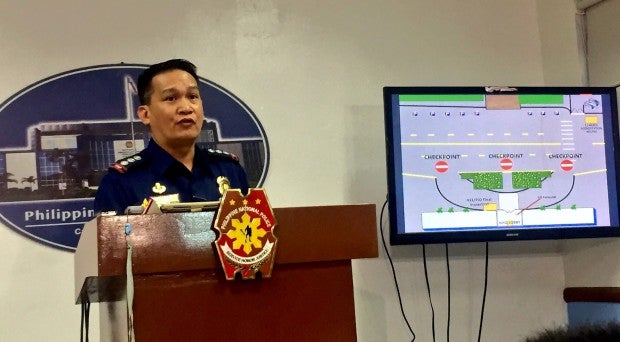 The Philippine National Police is blaming media coverage of extrajudicial killings (EJKs) for the double-digit drop in public satisfaction with the Duterte administration’s bloody war on drugs.

The media’s repeated use of EJKs when Social Weather Stations (SWS) conducted a survey last month may have heightened the public’s concern with personal safety, the PNP spokesperson, Senior Supt. Dionardo Carlos, said on Wednesday.

The public net satisfaction rating of the campaign against drugs declined to +66 from +77 last December, results of the SWS survey, conducted from March 25 to 28, showed.

The survey also found that 73 percent of respondents were worried that they or someone they knew would become victims of executions.

Carlos said the way the survey question was formulated could have also affected the answer of the respondents.

“If you were asked, ‘Are you afraid to die through EJK’ (given the stories coming out), what would be your normal answer? You would have also been afraid,” Carlos said at a press briefing.

It may be time to stop the Duterte administration’s bloody war on drugs as public opinion begins to tilt against it, according to two opposition lawmakers.

Ifugao Rep. Teddy Baguilat said the general public harbored strong sentiments against illegal drugs and crimes, which could explain the strong support for the drug war, or what he called President Duterte’s “bread and butter.”

“However, it’s not an absolute acceptance of the means and methods in carrying out the drug war,” he said in a text message to the Inquirer.

Baguilat, the leader of an independent minority faction in the House of Representatives, said he took comfort in the 11-point decline in public satisfaction with the war on drugs.

“I’m glad that Filipinos, despite their support for the antidrug campaign, are against extrajudicial killings, and this opinion was shaped by the images of the victims sprawled on the streets in the arms of their loved ones,” he said.

Malacañang played down waning public satisfaction with the war on drugs, pointing out that despite the decline in support, a majority of Filipinos were still behind the campaign.

Presidential spokesperson Ernesto Abella said the Palace was looking at the results from a “bigger perspective,” noting that there were adverse events taking place when the survey was conducted late last month.

“Despite all that, the deep appreciation of the Philippines is represented in this survey,” Abella said at a press briefing.

On the survey results showing that 73 percent of Filipinos were worried that they or anyone they knew would fall victim to extrajudicial killings, Abella said there was still a “general sense of safety” among Filipinos.