Duterte offers P1M bounty for each Abu in Bohol

(Updated, 12:58 p.m., April 20, 2017) President Rodrigo Duterte on Wednesday offered a P1-million bounty for each member of the Abu Sayyaf group who eluded police and military operations in Inabanga town Bohol after a deadly clash last week.

Duterte also said he was considering arming civilians against the terrorists Abu Sayyaf.

“Well, I intend also to arm the civilians and I will include the civilians. ‘Pag nakapatay ka (if you kill someone), you don’t have to worry. You just go to the police and make the report and state your truth. Wala kang problema (you have nothing to worry), I’ll take care of you,” he said. “I’ll pardon you or whatever.”

But the President said he might still need to consult local government officials regarding his order.

“I have to talk to local officials, they might have some objections,” he said.

The chief executive ordered state forces to contain the bandit group in Mindanao. 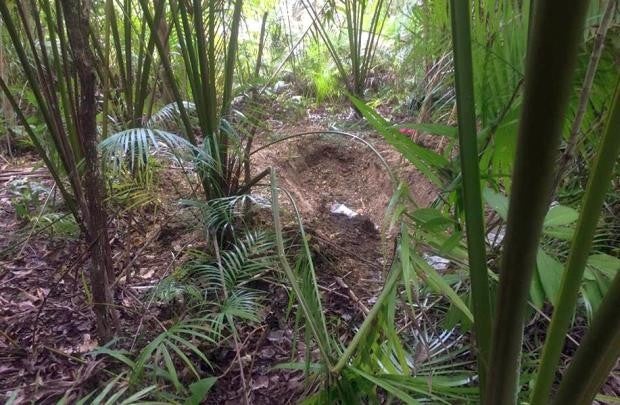 The shallow grave where a man was buried in Barangay Lonoy Cainsican, Inabanga town, Bohol, a kilometer from Sitio Ilaya in Barangay Napo, the site of heavy gunfire between government troopers and members of the bandit group Abu Sayyaf. (Contributed photo by LEO UDTOHAN)

READ: Hunt on for Abu Sayyaf bandits in Bohol clash

“They must not reach the places beyond the Mindanao Sea. Dapat doon lang sila (They should remain there). And we have the capability ‘yon ang plano naming (that’s our plan),” he said.

He said there is a need to finish the Abu Sayyaf group and he might order the invasion of Sulu if the problem couldn’t be contained.

“I will maybe invade Jolo. Invasion na lang talaga. But maraming ma-disgrasya diyan civilians, bata… But ‘pag naipit na ang bayan, I will order the invasion of Jolo (Invasion is probably the only way to go. I am just worried about the civilians and children who might be affected. But if it’s the country’s good is already on the line, I will order the invasion of Jolo),” he said. IDL