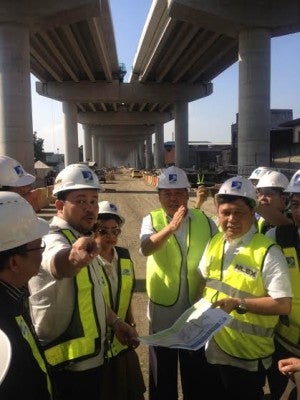 Motorists coming from Manila Port to the North Luzon Expressway (NLEX) may soon expect travel time to take only 10 minutes via the NLEX Harbor Link Segment 10.

“Once completed, this will ease traffic, travel time will become faster… this is our first salvo against congestion for this year,” said Public Works Secretary Mark Villar, adding that the project is already 53 percent complete.

Targeted to be completed at the end of this year, the NLEX Harbor Link Segment 10 is being implemented under the traffic decongestion program of the DPWH.

An all elevated expressway, NLEX Harbor Link Segment 10 is aimed at providing direct access between the port area and the northern provinces of Luzon via NLEX.

“This 5.7-km expressway will decongest Metro Manila by providing an alternative entry to NLEX, bypassing EDSA, and C5, which are both congested, as well as other busy streets of Manila,” Villar said.

“The P10.5-billion project, which is using the alignment of the Philippine National Railways (PNR), traverses Karuhatan in Valenzuela City, Governor Pascual Avenue in Malabon City, and C3 road in Caloocan City,” he added.

“Build, Build, Build” is the mantra of the administration’s infrastructure program where several government agencies are partnering to implement major projects involving roads, bridges, railways, airports, and green cities to bolster development and ease traffic congestion in the country.

Featured as one of the big-ticket projects in the said infrastructure plan, the NLEX Harbor Link Segment 10 is envisioned to alleviate traffic congestion and drive commerce between the Harbor area and Central and North Luzon. It is seen to advance transport logistics and facilitate efficient delivery of goods.

“Metro Pacific remains committed in supporting President Duterte’s infrastructure program. The NLEX Harbor Link will be a great boost to the country’s cargo transport industry as cargo trucks will have 24/7 direct access from the port area to the northern provinces of Luzon and vice versa,” said Pangilinan.

Lim cited that “Segment 10 is just one of the expansion projects geared towards connecting NLEX to key areas in Metro Manila to provide further convenience to motorists and spur economic growth in nearby cities and provinces.”

Aside from improved movement of cargo trucks, other project benefits include efficient traffic management and lower incidence of road accidents due to better road pavement.

For his part, Franco said, “Motorists who will be using Segment 10 will enjoy the same seamless, safe, and speedy travel experience like that of those plying the NLEX mainline.”

Segment 10 is the second and last portion of the NLEX Harbor Link. The other component, the 2.4-km Segment 9 became operational in March 2015.

The NLEX Harbor Link will also pave the way for the NLEX-SLEX Connector Road, which is expected to decongest major thoroughfares and improve linkages between airports, seaports, and growth corridors in the north and south.

The NLEX-SLEX Connector Road is expected to be finished by the Year 2020, according to DPWH.  JE/rga