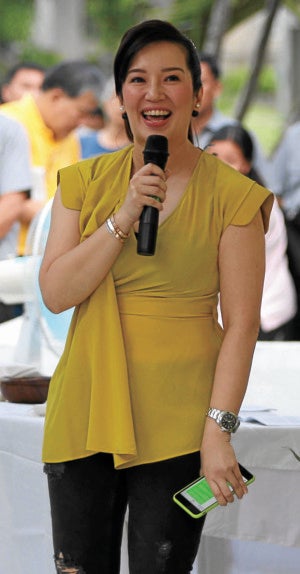 If things go as planned, Kris Aquino will join the cast of a movie based on a bestseller—the first Filipino woman to be cast in this Hollywood movie.

Aquino flew to Los Angeles on Easter Sunday to meet with the producers and sign the contract, sources say.

About six Filipino actresses, according to sources, had auditioned, but apparently only Aquino had landed a role, so far.

Talk has been going around that the movie is based on Kevin Kwan’s 2013 bestseller about an old-wealth Singaporean family, its matriarch Eleanor Young and its heir apparent—the Ivy-League-educated Nick Young, who flies home to Singapore for a friend’s wedding with his New Yorker girlfriend in tow.

Kwan gives readers a jaw-dropping glimpse of the lives—and secrets—of the rich and the chi-chi set. Kwan followed up this bestseller with “China Rich Girlfriend” (2015) and just this year, “Rich People Problems.”

Kwan was in Manila about two years ago and met the lifestyle set—and apparently drew inspiration from some of its characters.

Obviously the movie producers have had Aquino on their radar. According to our sources—and which Aquino confirmed in her Instragram post—Grammy and Tony award-winning producer Jhett Tolentino tried to contact Aquino through intermediaries—specifically Nene Chan and Rep. Len Alonte.

In her Instagram post, Aquino wrote she had only a few days to prepare an audition reel, so she got a suite at Peninsula Manila to mount the audition shoot, tapping her network that included director Ricky Villabona, Jules Dacanay and makeup artist Juan Sarte. The team then did rush editing and color grading of her audition reel and video biography.

“At this particular point in my life, to have the Hollywood door open is God-sent,” Aquino said.

And the suspense builds up.