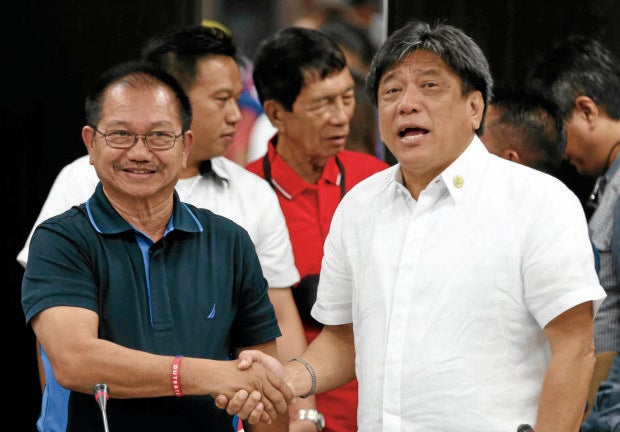 The Philippine approach to rice production and supply management continues to expose the country to shortages and price spikes, as its agricultural policy remains unchanged over several administrations despite disastrous results, an economist said on Monday.

University of the Philippines professor Ramon L. Clarete said Agriculture Secretary Emmanuel Piñol was doing the same things that his predecessor had done.

Clarete was referring to Proceso Alcala, who championed the Aquino administration’s push for rice self-sufficiency and took the blame for its failure.

Piñol on Sunday lashed out at economists and think tanks after the Inquirer reported on a commentary from New York-based Global Source Partners, which warned that the Duterte administration’s rice policy exposed the country to the risk of falling stocks and spiking prices.

As Piñol himself announced last week, “President Rody Duterte has ordered the National Food Authority (NFA) to buy the paddy rice produce of Filipino farmers and import only if there is a shortfall.”

Clarete described this policy as “local procurement first, we are not by the way against rice imports, and there is no need to import rice because we are sufficient in supply.”

Piñol took issue with economists and think tanks for suggesting that the ban on imports be reconsidered and that the NFA be allowed to import quickly as its buffer stock was running low and the lean months were approaching.

He said he never said that there should be no importation. “All that I asked the President was not to allow importation at peak harvest season.”

But Clarete said Piñol, like his predecessor, mistakenly equated sufficiency with no importation. “If local supply is equal to local consumption, that is 100-percent sufficiency all right but at a higher price,” Clarete told the Inquirer. “There is rice availability (supply may not drop) but access to that supply may not be inclusive because of the higher price.”

“So if the price goes up in the coming months, because of the ‘no need to import rice because we are sufficient in supply’ policy, the supply is not enough for the poor consumers,” Clarete said.

In his post on social media, Piñol said Mr. Duterte’s order to defer imports until after the harvest resulted in farmers’ income rising by P24.38 billion in the first quarter.

Clarete said the beneficiaries of the P24.38 billion included “greedy big farmers who informally ‘bought’ the rice lands of agrarian reform beneficiaries” as well as the few farmers (big or small) who are active members of farmers’ associations.

“We had heard this before, and politicians do not appreciate the divide between the small and big farmers, the small farmers and traders/creditors, and the unorganized and organized rice farmers,” Clarete said.

Citing data from a satellite-data processing technology developed by the International Rice Research Institute, Piñol said farm yield in the first quarter increased to 4.14 million metric tons of palay even as the harvest area decreased to 997,687 hectares.

The economist noted that Agriculture Secretary Roberto S. Sebastian of the Ramos administration expected good production in the 1994-1995 cropping season and no rice importation, based on a survey of farmers’ planting intentions.

“The year following he was out of office when the poor queued at the NFA warehouses for rice in an election year,” Clarete said.

Clarete suggested three ways to “fix the leaks in the bucket” by throwing away the old bucket and getting a new one.

First is giving cash transfer directly to the bottom 60 percent of rice farmers, coupled with enabling the farmers the right to opt for paying their creditors/traders with cash from the loan proceeds using the warehouse receipts; or giving up their rice to traders in payment for their debt obligation as now practiced.

Second, in the next five years, enact a good warehouse receipts law in which farmers can deposit their paddy rice and use the warehouse receipts to borrow money from rural banks or Landbank coupled with enabling the farmers the right to two options similar to the cash transfer proposal.

Piñol said he never called for zero importation. “Tell (Clarete) the Philippines must be free from armchair economic experts who could not even read properly. I have an extra pair of eyeglasses. I could give it to him.”