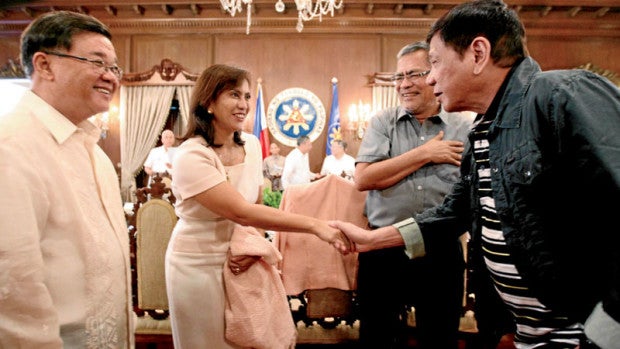 Despite impeachment threats against the country’s two highest officials, most Filipinos still trust and approve of the performance of President Rodrigo Duterte and Vice President Leni Robredo in the first quarter of 2017, according to a recent survey by Pulse Asia.

The survey, conducted from March 15 to 20, showed that President Duterte was still the most trusted Philippine official with a 76-percent rating, despite a seven-point drop from his score in the previous quarter.

Pulse Asia said the decline in Duterte’s trust rating was “the only significant movement at this time” on public sentiments regarding trustworthiness of top government officials. All other figures were “virtually unchanged” between December 2016 and March 2017, Pulse Asia said.

The President scored majority trust ratings in all geographic areas (from 67 to 90 percent) and socioeconomic classes (from 74 percent to 84 percent). He also got the lowest distrust rating among the officials at 5 percent. 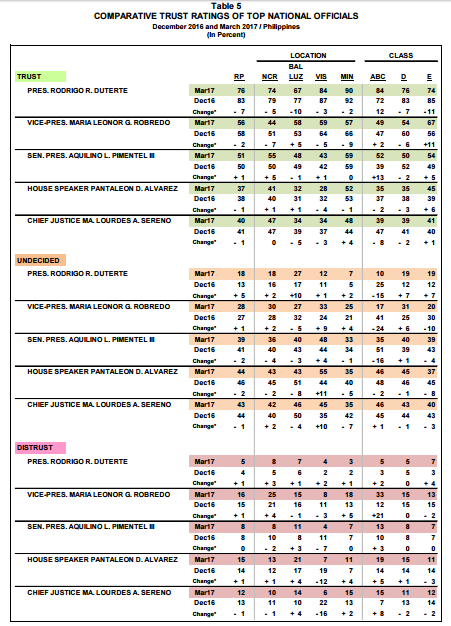 Robredo, meanwhile, received a 56-percent trust rating from respondents. While she enjoyed majority trust ratings in almost all geographic areas and socioeconomic groupings, the Vice President recorded the highest distrust rating among the top national officials at 16 percent.

Robredo’s indecision rating dropped by 24 percentage points in class ABC but distrust for her increased in the same grouping by 21 percentage points. She posted plurality trust scores in Metro Manila (44 percent) and among class ABC respondents (49 percent).

As to his performance, Duterte received a 78-percent approval rating, or five points lower than his score in December. Only the President received majority approval scores in all geographic areas and socioeconomic classes. 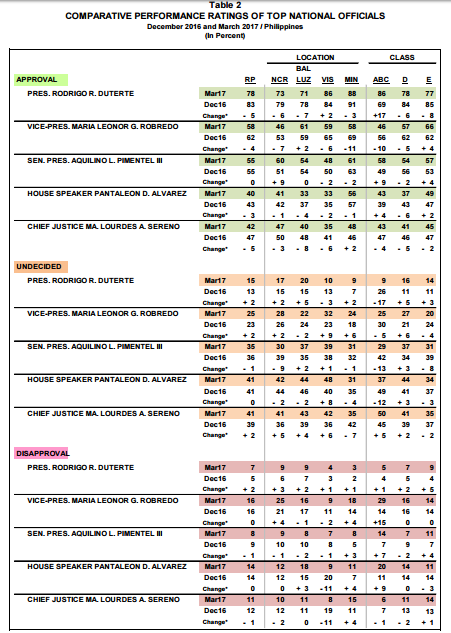 Robredo also registered majority approval ratings in most geographic areas and socio-economic groupings (58 to 61 percent and 57 to 66 percent, respectively), except in Metro Manila and among Class ABC respondents where she posted a near majority approval score of 46 percent.

Pimentel, Alvarez, and Sereno got performance ratings of 60 percent, 41 percent, and 47 percent, respectively. Pulse Asia noted that Alvarez’s only majority approval rating was given by Mindanaoan respondents (56 percent).

The decline in the top officials’ approval scores were considered insignificant, Pulse Asia said. The survey, conducted among 1,200 adult respondents, had an overall error margin of +/- 3 percentage points. JE/rga

Read Next
Ex-Baseco exec charged with graft, malversation
EDITORS' PICK
Metro Manila to remain under COVID Alert Level 2 until December 15
IATF tightens border control, suspends entry of fully vaxxed nationals from ‘green’ countries
Villar Group gears up for AllValue Shopping Party on Dec. 3; around P 1-million promos and discounts up for grabs
Duterte open to making jabs mandatory; Cabinet mulls ‘pressuring’ the unvaccinated
Legarda: Ending Violence Against Women, a cause for all
A delightful blessing!
MOST READ
Quiboloy warns of ‘much worse than Omicron virus’ if his ‘persecution’ is not stopped
Omicron poses ‘very high’ global risk, countries must prepare–WHO
Marcoleta defends pol ads on ABS-CBN
Bongbong Marcos’ conviction in tax case not a crime involving moral turpitude — lawyer
Don't miss out on the latest news and information.