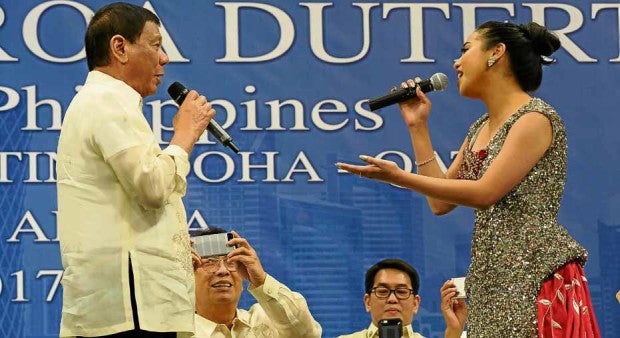 TRADITIONAL PINOY GATHERING What’s a Filipino event without a song number? President Duterte and a Filipino singer oblige with a duet during a gathering at Lusail Sports Arena, 20 kilometers north of the Qatari capital, on Saturday. —AFP

The deals were signed between Filipino and Middle East businessmen, presidential spokesperson Ernesto Abella told reporters in the Qatari capital, Doha, on Sunday.

Trade Secretary Ramon Lopez admitted that some of the deals had been years in the making but had been concluded under the Duterte administration.

Mr. Duterte traveled to Saudi Arabia and Bahrain at the start of his Middle East swing last week.

In Bahrain, memorandums of agreements worth $250 million were signed, Lopez said.

During a Philippine-Qatar business forum here on Saturday, 13 projects worth $206 million were signed, he said.

Health Secretary Paulyn Ubial said the agreements signed here included the establishment of an all-Filipino polyclinic that would serve both Filipinos and Qataris.

Earlier, Charito Plaza, director general of the Philippine Economic Zone Authority, said most of the investment deals were for special economic zones in the Philippines.

There are 345 special economic and free trade zones in the Philippines, including Mindanao. Of these, 17 are agro-industrial zones, 65 manufacturing zones, 15 medical tourism zones, 178 information technology parks and 15 tourism zones.

Lopez said the Philippines would sign an investment protection and promotion agreement with Qatar, as Qatar planned to put in $1 billion in investments in various Philippine economic sectors, including natural resources, commodities, energy, agriculture and infrastructure.

“Qatar has been planning to invest in the Philippines for a long time. But it could not happen under the previous [administration],” he said, without elaborating.

The Philippines is a major source of labor for the Middle East.

Earlier, Abella said Mr. Duterte was traveling to the Middle East to meet the migrants, especially those working in Saudi Arabia who supported him in last year’s presidential election.

On Friday night, Mr. Duterte met with 6,000 Filipino migrants in the Qatari city of Lusail and promised them he would make what he called oligarchs in the Philippines, including tobacco tycoon Lucio Tan, pay their back taxes.

“He has to pay,” Mr. Duterte said, adding that Tan had been running after him since the campaign.

A Court of Appeals ruling in March, however, reduced that amount to just P199,415.80 plus interest.

Mr. Duterte lashed out at his critics, saying they had greatly underestimated him.

He compared himself to US President Donald Trump, who he said was seen by his critics as a president who knew nothing but curse and spew out profanities.

“That’s what they think. We are the same. Trump is a deep thinker,” he said.

He said he and Trump were “realists” and “pragmatic thinkers.”

He promised to work for more protection for migrant workers.

In a meeting with Filipino migrants in Bahrain on Friday, he promised to establish a separate department that would handle migrant workers’ concerns.