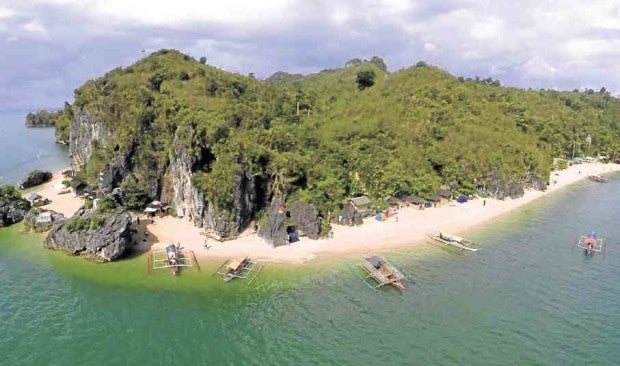 Outriggers like these are popular modes of interisland transportation, but are the least capable of surviving strong waves. —DELFIN P. MALLARI III

Many of the dead were from accidents involving boats. The others died in separate cases of drowning.

One of the youngest fatalities was a child traveling aboard a boat with pilgrims in Laguna Lake, while another young fatality was aboard a tourist boat in Quezon province headed for Sombrero Island.

In Quezon, Junrex Dilao, 12, was found dead by fishermen and rescuers after strong waves caused the motorized boat he was riding to capsize and sink in Sibuyan Sea in San Francisco town on Good Friday, according to police.

Strong waves battered the boat, causing it to capsize and sink.

Henry Buzar, Quezon disaster management coordinator, said authorities sought help from other towns in the Bondoc Peninsula district and coastal towns in Masbate to help search for the missing.

In Laguna, 7-year-old Jonalyn Procopio was among those killed when an outrigger boat with pilgrims capsized in Laguna Lake on Maundy Thursday.

Rommel Palacol, of the Laguna Action Center, said the boat, with only one outrigger, was likely overloaded with 16 people onboard.

The passengers were mostly residents of Pila town in Laguna province, who were headed for Jala-jala, Rizal for a mountain trek as part of their Holy Week ritual, Palacol said.

Quoting survivors, Palacol said one of the passengers sat on one edge of the boat to play a prank joke on the other passengers, causing the boat to tilt over.

At least 12 passengers had been rescued.

In Pililia, Rizal, 7-year-old Limeah Cabral drowned while swimming in a creek on Maundy Thursday.

In Cavite province, Noel Anthony Restauro drowned while swimming in a resort in Barangay Sabang in Dasmariñas City on Good Friday. 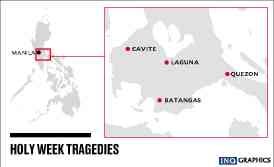 In Balete, Batangas, Freddie Fernandez drowned while swimming in the lake in Barangay San Sebastian on Good Friday.

Gasper Perlas drowned in a pool at Praxises Resort in Rosario, Batangas, on Maundy Thursday.

In Quezon, at least three, two of them children, died in separate drowning cases on Maundy Thursday and Good Friday.

Police said Cabangon was intoxicated when he drowned.