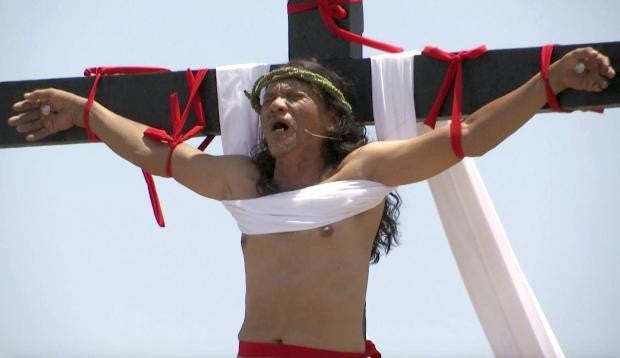 In this image made from a video, Filipino penitent Ruben Enaje is nailed to a wooden cross at a crucifixion reenactment during Good Friday rituals on April 14, 2016 at Cutud, Pampanga province. Several Filipino devotees had themselves nailed to crosses Friday to remember Jesus Christ’s suffering and death. (Photo from AP)

SAN FERNANDO, Pampanga— Several Filipino devotees were nailed to crosses in a re-enactment of a Good Friday ritual, which one of the men dedicated to the victims of the deadly bombings of two churches in Egypt.

Ruben Enaje, 57, who has been re-enacting Jesus Christ’s suffering and death for the past 31 years, said he always prays for the health of his family during the ritual. But this time he added the victims of the Egyptian attacks, which killed 45 people and wounded dozens on Palm Sunday.

“As long as we trust in the Lord, praying fervently, it’s never too far that the Lord won’t listen,” Enaje said after he was briefly nailed by the hands and feet, grimacing in pain.

The gory spectacle reflects the Philippines’ unique brand of Catholicism, which merges church traditions with folk superstitions. Many of the mostly impoverished penitents undergo the ritual to atone for sins, pray for the sick or for a better life, and to give thanks for what they believe were God-given miracles.

The Lenten rituals are frowned upon by church leaders in the Philippines, Asia’s largest Roman Catholic nation, especially if the event is used to boost tourism. The re-enactments of the crucifixion, however, have persisted and became an awaited tourist attraction in this area some 80 kilometers (50 miles) north of Manila.

All of those who took part were attended by doctors.