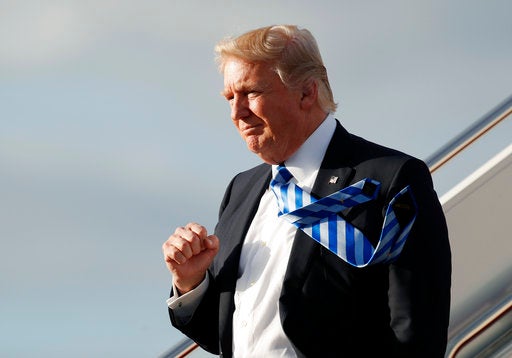 President Donald Trump pumps his fist as he walks down the steps off Air Force One as he arrives at the Palm Beach International Airport, Thursday, April 13, 2017, in West Palm Beach, Fla. (AP Photo/Alex Brandon)

WASHINGTON—Donald Trump has long been seen as mercurial, but maybe never quite so much as this past week.

The US president in recent days abandoned a series of campaign promises and strident world views that were held for months and, in some cases, years.

From China to Syria, trade to the dollar, a rapid succession of 180 degree reversals has left Washington, foreign capitals and Trump’s own fans with a nasty case of political whiplash.

Just 87 days ago Trump declared NATO “obsolete.” On Wednesday he proclaimed “it’s no longer obsolete,” a seemingly miraculous rediscovery of purpose for the usually slow-moving alliance.

After talks and a slice of chocolate cake at Mar-a-Lago, China’s Xi Jinping was no longer responsible for the “rape” of the US economy. Instead, Xi was a leader with whom Trump enjoyed good “chemistry” and “bonding.”

Others were not so lucky — falling on the wrong side of Trump’s list of good guys and bad guys.

“There is a moral affront and there is maybe a personal anger, even a humiliation for Trump,” said Hussein Ibish of the Arab Gulf States Institute.

Russian President Vladimir Putin’s refusal to end his support for Assad has resulted in another dramatic about face.

It was “certainly possible” Putin knew about the sarin attack, Trump said.

“Right now, we’re not getting along with Russia at all. We may be at an all-time low in terms of relationship with Russia,” Trump said pensively.

READ: Trump declares US-Russia relations may be at ‘all-time low’

He may have omitted the Cuban Missile Crisis and much of the Cold War, but it was an unmistakable message and a far cry from the praise Putin got from Trump during the campaign.

Almost simultaneously, Trump also reversed his opposition to the Export-Import Bank, said he might renominate Fed chair Janet Yellen after all and proclaimed the dollar too strong.

And his budget guru quietly declared that a promise to eliminate the deficit was just “hyperbole.”

For White House spin doctors, these were not policy U-turns at all, but evidence Trump is bending the world to his will.

“If you look at what’s happened, it’s those entities or individuals in some cases, or issues, evolving towards the president’s position,” said White House press secretary Sean Spicer.

On issues like NATO turning its attention to terrorism to China abandoning currency manipulation — from the White House perspective, things are just getting better in the Age of Trump.

In reality, China stopped weakening the yuan years ago and NATO has been fighting jihadist groups for the better part of a decade.

Part of the explanation for Trump’s reversal may come from inside the White House, where radicals like Steve Bannon, Mike Flynn and KT McFarland have been sacked or notably sidelined.

At the National Security Council, HR McMaster has taken the reins and, according to insiders, is presiding over a more structured policy-making process that hews toward a more conventional fact-based approach.

In the West Wing, globalists like Trump’s daughter Ivanka, son-in-law Jared Kushner and top economic advisor Gary Cohn are on the ascendency.

But the idiosyncrasies of a 70-year-old dealmaker may also explain some of his strategic gymnastics.

Trump’s softer tone on Japan, China and NATO have all come after face-to-face meetings with their leaders, who each sought to mimic the businessman’s transactional approach.

After meeting Trump, Xi refrained from blocking a UN vote condemning Assad, turned away North Korean coal ships and, according to officials, signaled market access may soon improve for US auto and agricultural firms.

All that was manna for the wheeling-dealing president, who promptly said China was not manipulating its currency — despite promising to make that declaration on day one.

Trump also appears to be learning on the job. Speaking to the Wall Street Journal, the political neophyte expressed his surprise at learning that China cannot dictate terms in North Korea.

“After listening for 10 minutes, I realized it’s not so easy,” Trump told the paper.

“I felt pretty strongly that they had a tremendous power over North Korea,” he said. “But it’s not what you would think.”

His tougher lines on Syria and Russia are overwhelmingly popular. His overture to Beijing comes as Gallup reported that China is more popular in America than it has been in three decades.