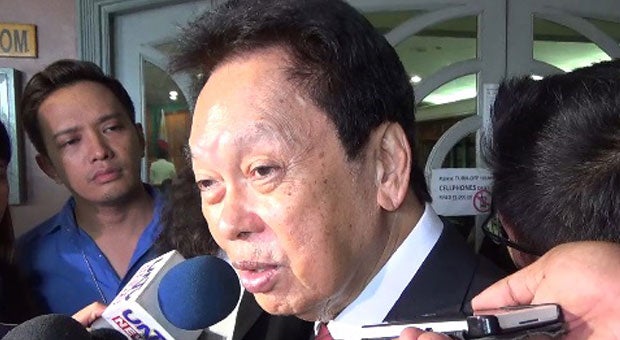 MANILA — The Sandiganbayan has allowed at least one and a half months of back-and-forth between the prosecution and the camp of former President Estrada’s alleged dummy Jose Dichaves before it may issue a warrant of arrest.

Dichaves has yet to be ordered arrested for the non-bailable plunder case, as his camp, led by Estrada’s former defense lawyer Estelito Mendoza, wants to know first which evidence serves as the basis for a finding of probable cause to try him.

During Tuesday’s hearing, the Seventh Division ordered the Ombudsman prosecutors to file a comment-opposition on Dichaves’ motion in 30 days. Mendoza requested another 15 days to respond to the prosecution’s comment.

Offhand, Assistant State Prosecutor Loreto Cunanan told the open court that the plunder case has long been decided against Estrada and the prosecution’s efforts have been sustained since. He hinted that this shows a finding of probable cause against Dichaves, who has never faced the court thus far.

But, Cunanan said that he has not seen the records personally because they have been already archived.

Mendoza, for his part, reiterated that “we have questions on the basis of probable cause to issue the warrant of arrest.”

“Likewise, the accused [Dichaves] should be informed of the evidence,” he said, adding that the businessman’s trial would be apart from Estrada’s.

The Sandiganbayan proceedings only recently resumed after the Supreme Court in December lifted a three-year temporary restraining order and upheld the validity of the Ombudsman’s 2011 reinvestigation of the case.

Asked by Justice Alexander G. Gesmundo if the pending appeal at the Supreme Court would not affect his Sandiganbayan motion, Mendoza answered in the negative.

The businessman claims to be the true owner of the Jose Velarde bank account at the Equitable-PCI Bank. Prosecutors alleged Estrada conspired with Dichaves to use the account to stash P3.23 billion in ill-gotten wealth including commissions from the government’s purchase of shares from leisure firm Belle Corp.

Dichaves, however, could not be tried alongside Estrada in Criminal Case No. 26558, as he slipped out of the country by the time the Sandiganbayan first ordered his arrest on Jan. 29, 2002.

He returned only in Nov. 19, 2010, three years after the former president was convicted for plunder in September 2007 but pardoned only six weeks later. (Estrada placed second in the 2010 presidential elections and has been Manila mayor since June 2013.)

Mendoza invoked the constitutional right of the accused to be informed of the nature of allegations as part of due process in Dichaves’ case, the same tactic he had employed in the pork barrel scam cases of former Senators Juan Ponce Enrile and Ramon Revilla Jr., although the legal heavyweight was arguably more successful in the senior senator’s case.  SFM