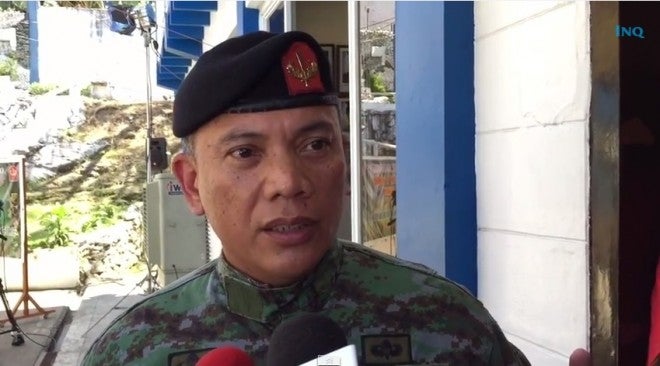 CEBU CITY — The Central Visayas police director said on Wednesday that the police would subject to further examination the body of one of the five suspected Abu Sayyaf bandits slain in Bohol to verify if indeed the remains were those of Abu Sayyaf leader Abu Rami.

The leader of the armed group who entered Inabanga on Monday was reportedly killed in an ongoing firefight with government troopers in the mountain village of Napo.

A thorough examination, however, would be done to verify the identity of the fatality, said Taliño.

“A comparison shall be made. Let us wait for the result to be sure. The body looks like Abu Rami but we just want to be certain,” said Taliño in a media interview on Wednesday.

Of the five suspected ASG members killed, one of them was a woman.

Three soldiers and one policeman died in the exchange of gunfire that started at 5:40 a.m. on Tuesday when residents reported the presence of armed men in their village.

The fatalities on the government side were identified as 2nd Lt Estelito Saldua Jr., Corporal Meljun Cajaban, Sergeant John Dexter Duero, and SPO2 Rey Anthony Nazareno, a member of the Special Weapons and Tactics from Calape town.

Another soldier, Corporal Chris Jude Borlas, was wounded and was recuperating at the Tubigon hospital.

Burial and financial assistance would be extended to the families of those who died as well as that of the wounded soldier, Taliño said.

Government troopers were able to recover three M-16 rifles and a M-4 carbine from the armed group. Taliño said they could not yet ascertain the number of armed men who fought against the government troopers.

“We still don’t have a confirmation as to how many armed men really came here,” he said.

“What is sure is five of them were killed,” he added.

As of Wednesday, Taliño said the situation in other parts of Bohol remained normal.

“The tension is just confined in sitio Ilaya, Barangay Napo. The rest of Bohol is okay. Within the day, our objective is for the situation in Barangay Napo to normalize,” he said.

Taliño said reports that other members of the armed group were heading to Cebu on board pump boats had yet to be validated.

“I asking our policemen in Cebu to confirm that. Nevertheless, our troops in Cebu are ready. The ports are being guarded,” said the police regional director who has remained in Bohol to monitor and
supervise the operations.

Reports said that Ocaña resident Ruben Rudy saw the pump boats in the waters off Sitio Bobon in Barangay Ocaña and were “believed to be carrying (firearms) arms.” One of the pump boats was white in color while the other one was colored red.

Other unconfirmed reports were about sightings of six pump boats in the waters off Dumaguete City.

“We are coordinating with Centcom in securing our waters. It’s a joint effort because it is difficult to do this alone,” Gonzales said.

Despite the gunfight in Bohol, Taliño said the Association of Southeast Asian Nations Summit meetings in Panglao, Bohol from April 19 to 22 would go on as scheduled.

At least 4,000 policemen will be deployed in Panglao and other key areas in Bohol starting April 15, according to Taliño.

“Business as usual. There are no cancellations. Kayang-kaya natin yan. (We can do it),” he said.  SFM