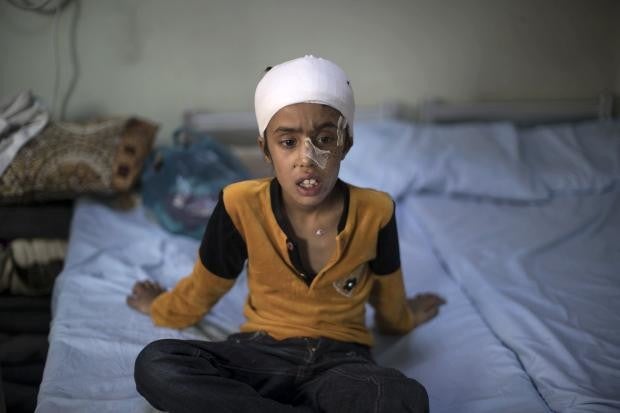 Ten-year-old Nabaa sits on her bed at a hospital in Erbil, Iraq, Saturday, April 8, 2017. Since she got struck by mortar shrapnel in Mosul just over a week ago, 10-year-old Nabaa has not been able to speak. A shard in her skull damaged part of her brain and doctors aren’t sure if she’ll ever be able to speak again. (Photo by FELIPE DANA / AP)

IRBIL, Iraq — Since she got struck by mortar shrapnel in Mosul just over a week ago, 10-year-old Nabaa has not been able to speak. A shard in her skull damaged part of her brain and doctors aren’t sure if she’ll ever be able to speak again.

The girl’s family had been forced to flee their home in the northern Iraqi city because fighting was raging around them, government artillery and helicopters were bombarding their neighborhood, and their food supplies were running out, said Nabaa’s mother, Umm Abdul-Rahman.

But as they neared Iraqi military lines the night of March 31, mortars hit, wounding Nabaa and her two brothers, 7-year-old Basem and 11-year-old Abdul-Rahman. The mother said she saw three others lying wounded on the ground after the strike but she didn’t know their fate.

The family is among a large number of civilians who have been caught in the middle of what appears to be a far more brutal battle over the western half of Mosul than the preceding fight for the east.

In the west, Iraqi government forces trying to wrest back the city from Islamic State fighters are relying on heavier firepower, including extensive barrages with mortars, rocket launchers and some improvised systems without guidance mechanisms.

While the east was retaken by Iraq’s special forces, much of the fighting in the west is done by militarized police units that have less experience in urban battle. Iraqi forces recaptured the east at the end of January and moved against the west in mid-February.

“They see resistance and implement a carpet-bombing approach to advance. They do this to reduce their own casualties. This is disastrous for the civilians,” said Col. Ahmed Shawki, a military analyst and retired Iraqi army officer based in the northern city of Irbil.

At the same time, IS fighters in some cases are preventing civilians from leaving, keeping them in harm’s way as shields.

The number of casualties is hard to establish because only some of the wounded reach hospitals and most of the dead are buried immediately. At least 300 people were killed in western Mosul up to the beginning of April, according to the U.N. The World Health Organization says 1,683 wounded civilians were referred to hospitals between February 18 and April 8. Johannes Schad, a doctor in West Irbil Emergency Hospital, said that about 60 percent of the victims have blast injuries, mostly from shelling.

Some 1,600 civilians were killed or wounded during the 100 days of fighting to recapture Mosul’s less densely populated east. Dr. Shalan Ali, the Health Ministry official in charge of Ninevah province, thinks up to a thousand have already been killed in the west.

The worst single attack came on March 17, when an airstrike by the US-led coalition hit a building in the New Mosul neighborhood, killing more than 100 civilians who were sheltering inside. The US military is investigating the strike, and officials say IS militants — who have been seen elsewhere forcing civilians into buildings to use them as shields — may have played a role.

The shelling in western Mosul has been much more intense than in the east.

One police artillery unit based outside the city said they alone fired up to 200 shells a day. Police Lt. Col. Younis Sultan Jadalla told The Associated Press that they use drone footage to choose targets and only fire if there are no civilians nearby.

Drone footage taken by the AP in the Dawasa neighborhood of western Mosul on April 5 shows entire streets reduced to rubble, with deep craters dug up by airstrikes. By comparison, eastern Mosul was generally preserved, with damage mainly concentrated on individual buildings and road junctions.

Basem Mohammed, a resident of western Mosul’s Nablous neighborhood, said IS fighters had a position in a nearby park from which they fired at Iraqi forces. In an apparent response from government forces, his street was hit by mortars on March 8, with shells hitting his neighbors’ houses, wounding several people.

He was wounded in the leg by mortar fire a week later, as he and his family fled.

Much of the destruction is wrought by Iraqi and coalition air power. An analysis of bombing in western Mosul between March 8 and 25, conducted by Human Rights Watch and using satellite imagery, identified 780 impact sites that may have been caused by large, air-delivered munitions, resulting in the destruction of hundreds of buildings. The analysis called the destruction comparable in intensity to the Russian-Syrian air attacks on Aleppo in September and October last year.

IS militants, too, are shelling the areas that have slipped out of their control.

Among their victims is Nashwan Jamal, 25, who was hit on March 11 in the Tel Alruman neighborhood, four days after it was taken by Iraqi special forces. Jamal, his brother and a friend were sitting on the roof of their home when a mortar landed, wounding him in the leg.

Several people who escaped western Mosul told the AP that IS forbade people to leave. Omar Marwan said IS fighters told people on his street that they had planted a bomb so that they wouldn’t flee.

“They told us, stay in the house, you can’t get out. One of them even said, you have to stay until it is destroyed. No one can leave,” said Alaa Hassan, 27, from the New Mosul neighborhood. “We tried to escape when they were busy fighting. But then we ran into them and they shot at us.”

Alaa Hassan’s wife was killed in the March 17 airstrike, and his 4-year-old daughter, Hawra, was badly burned.

Hawra’s grandmother, Alia Ali, said the militants would not let them leave even after the airstrike on their house. “I went to them and told them we have a burned child and we need to take her out and they said no. They said, you have to stay here with us. And you will die here with us.” They reached Iraqi lines two days later./rga