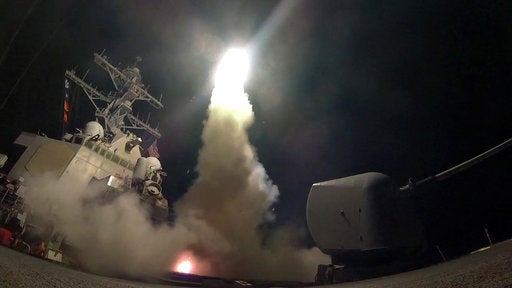 LUCCA, Italy — With fresh urgency but scant solutions, US Secretary of State Rex Tillerson and top foreign diplomats held an urgent meeting Tuesday to strategize on a way forward to end the protracted civil war in Syria.

A meeting of the “likeminded” countries was hastily arranged on the sidelines of a Group of 7 industrialized economies in Italy, days after the US for the first time launched airstrikes against Syrian President Bashar Assad’s forces. It came hours before Tillerson was to make a tense trip to Moscow to press Russia’s leaders to finally abandon their support for Assad.

Though intended to punish Assad for a chemical weapons attack, the US strikes last week served to refocus the world’s attention on the bloody war in Syria, now in its seventh year. Diplomats gathered in Italy as US officials in Washington floated the possibility of new sanctions on the Syrian and Russian military, plus the threat of additional US military action if Assad’s government continues attacking civilians.

At Tuesday’s meeting in the walled Tuscan city of Lucca, the G-7 countries were joined by diplomats from Muslim-majority nations including Jordan, Qatar, Saudi Arabia, Turkey and the United Arab Emirates. The inclusion of those countries is important because the US strategy for Syria involves enlisting help from Mideast nations to ensure security and stability in Syria after the Islamic State group is vanquished.

Seated around long tables in an ornate, red-walled room, the diplomats smiled and exchanged pleasantries but made no remarks as photographers were allowed in briefly for the start of the meeting. The session lasted roughly an hour.

A key focus since the chemical attack has been on increasing pressure on Russia, Assad’s strongest ally, which has used its own military to prop up Assad in Syria. The US and others have said that Russia bears responsibility for the deaths of civilians at the hands of Assad given Moscow’s role in guaranteeing the 2013 deal in which Assad was supposed to give up his chemical weapons arsenal.

The US raised the stakes significantly on Monday when a senior US official said Washington has made a preliminary conclusion that Russia knew in advance of Syria’s chemical weapons attack last week. Yet the US has no proof of Moscow’s involvement, said the official, who wasn’t authorized to speak publicly on intelligence matters and demanded anonymity.

That accusation will hang over Tillerson’s visit to Moscow, where he plans with meet with Russia’s foreign minister and possibly with Russian President Vladimir Putin. The Kremlin declined to say whether Putin would meet with Tillerson, in line with its usual practice of not announcing such meetings ahead of time.

The United States has sought to downplay expectations for the trip or the likelihood that the US will leave with any concessions from Russia regarding its support for Assad. Instead, the US is hoping to use the trip – the first by a Trump Cabinet official to Russia – to convey its expectations to Moscow and then allow the Russians a period of time to respond.

Yet even as the US seeks to project a sense of urgency about the Syria crisis, Washington has struggled to explain a hazy strategy that has yet to clarify key questions: whether President Bashar Assad must go, how displaced Syrians will be protected and when America might feel compelled to take further action.

Successive attempts by top Trump administration officials to articulate a plan have only furthered the appearance of a policy still evolving. In the absence of answers, other countries seem to be moving ahead on their own terms.

Tillerson himself raised fresh expectations for aggressive US action – and not only in Syria – as he visited Sant’Anna di Stazzema, a Tuscan village where the Nazis massacred more than 500 civilians during World War II. As he laid a wreath, he alluded to the Syria chemical attack.

“We rededicate ourselves to holding to account any and all who commit crimes against the innocents anywhere in the world,” Tillerson said.

Though such comments hint at a more activist US foreign policy focused on preventing humanitarian atrocities, President Donald Trump has consistently suggested he prefers the opposite approach. His new administration has generally downplayed human rights concerns while promoting an “America First” strategy de-emphasizing the concerns of foreign nations.

No component of Trump’s Syria policy has engendered more confusion than Assad’s future – an issue that similarly befuddled the Obama administration, whose once-adamant position that Assad must go softened substantially by the time President Barack Obama left office in January.

Leading up to the US missile attack, Trump’s administration had said that Assad’s future was up to the Syrian people. Then Trump, the day after the assault, said his thinking about Assad had changed. Tillerson answered a question about effecting regime change by saying the US was organizing a coalition to do just that.

Yet after Trump’s retaliatory strike, the position became less clear. Some officials, like Tillerson, said the US was confident Syrians would choose on their own to push Assad aside, while suggesting the US wouldn’t mandate it. UN Ambassador Nikki Haley and others said that ousting Assad was indeed a US goal, but only one of several.