US seeks help on Syria but leaves key questions unresolved 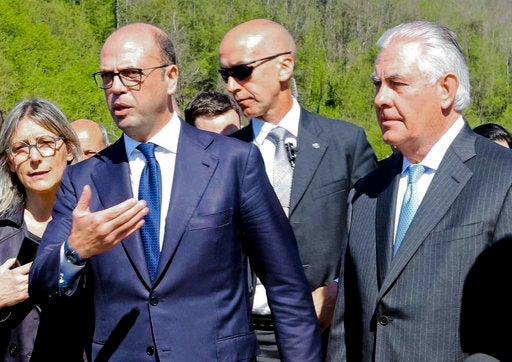 U.S. Secretary of State Rex Tillerson, right, and Italian Foreign Minister Angelino Alfano, left, speak to the media after laying a wreath at a memorial in Santa’ Anna di Stazzema, a site of Nazi atrocities where 560 civilians, including some 130 children, were killed during World War II. Tillerson said Monday that the United States is rededicating itself to hold to account “any and all” who commit crimes against innocent people. (Riccardo Dalle Luche/ANSA via AP)

LUCCA, Italy — U.S. allies are moving ahead with their own policies for dealing with Syria after attempts by top Trump administration officials to articulate a plan left key questions unresolved in the wake of missile strikes on President Bashar Assad’s military.

Left unclear was whether Assad must relinquish power, how displaced Syrians would be protected and when the U.S. might feel compelled to take further action. President Donald Trump ordered the strikes last week in reaction to Assad’s use of chemical weapons.

After meeting with U.S. Secretary of State Rex Tillerson, British Foreign Secretary Boris Johnson floated the possibility of new sanctions on both the Syrian and Russian militaries, an idea the U.S. has only briefly mentioned. In an unusual announcement for a foreign government, Johnson also said the U.S. could launch more cruise missiles into Syria.

Tillerson himself raised fresh expectations for aggressive U.S. action — and not only in Syria — as he visited Sant’Anna di Stazzema, a Tuscan village where the Nazis massacred more than 500 civilians during World War II. As he laid a wreath, he alluded to the Syria chemical attack.

“We rededicate ourselves to holding to account any and all who commit crimes against the innocents anywhere in the world,” Tillerson said.

Though such comments hint at a more activist U.S. foreign policy focused on preventing humanitarian atrocities, President Donald Trump has consistently suggested he prefers the opposite approach. His new administration has generally downplayed human rights concerns while promoting an “America First” strategy de-emphasizing the concerns of foreign nations.

The uncertain view of U.S. objectives prevailed as Tillerson planned to attend a meeting Tuesday of the “likemindeds” — countries that share a similar approach to resolving Syria’s protracted civil war. The session, which was taking place on the sidelines of the Group of 7 summit in Italy, was to include Middle East countries, including Turkey, Saudi Arabia, Jordan and the United Arab Emirates, which share a U.S. interest in resolving the conflict and resisting Iran’s influence in Syria.

On Tuesday evening, Tillerson was scheduled to fly to Moscow, the first official visit by a Trump Cabinet official to Russia, Assad’s strongest ally. The U.S. has said its Syria strategy centers on persuading President Vladimir Putin to stop supporting Assad. On Monday, the U.S. raised the stakes significantly by accusing Russia of knowing in advance of the chemical attack and using a Russian-operated drone to help cover it up.

No component of Trump’s Syria policy has engendered more confusion than Assad’s future — an issue that similarly befuddled the Obama administration, whose once-adamant position that Assad must go softened substantially by the time President Barack Obama left office in January.

Leading up to the U.S. missile attack, Trump’s administration had said that Assad’s future was up to the Syrian people. Then Trump, the day after the assault, said his thinking about Assad had changed. Tillerson answered a question about effecting regime change by saying the U.S. was organizing a coalition to do just that.

Yet after Trump’s retaliatory strike, the position became less clear. Some officials, like Tillerson, said the U.S. was confident Syrians would choose on their own to push Assad aside, while suggesting the U.S. wouldn’t mandate it. U.N. Ambassador Nikki Haley and others said that ousting Assad was indeed a U.S. goal, but only one of several.

Another unanswered question: Did Trump’s strike set a precedent that any chemical attack will trigger a U.S. response?

At the White House, spokesman Sean Spicer insisted that Trump wouldn’t box himself in by disclosing his actions in advance. But he added further uncertainty to the equation by saying that even barrel bombs, which Assad has used with frequency, would necessitate U.S. action.

“If you gas a baby, if you put a barrel bomb in to innocent people, I think you will see a response from this president,” Spicer said.

Minutes later, the White House rushed to clarify that Spicer wasn’t announcing any new policy on barrel bombs. “Nothing has changed in our posture,” a White House official said in a written statement.

On one point, the administration has been consistent: Defeating the Islamic State group in Syria is the first priority. There’s less certainty about what comes now.

Tillerson and other officials have said the next priority is to create “zones of stability” in Syria where those displaced by civil war can live without fear of violence. They say that entails negotiating cease-fires between Assad’s government and rebels who have been fighting both IS and Assad. With stability restored, they say, conditions would be ripe for a U.N.-brokered political transition.

Yet it’s unclear why rebel groups would agree to cease-fires with Assad, who would protect the zones, and how. Assad’s willingness to clear the way for political talks predicated on him leaving power is deeply in question.