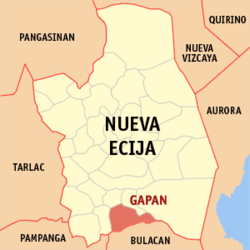 GAPAN CITY — A barangay (village) councilman was shot dead and then dumped in a grassy area on Sunday night (April 9).

Fernando Vendivil, 45, councilor and resident of Barangay Macabaclay, was not under surveillance for drugs, so the police were puzzled by a sachet of suspected shabu (methamphetamine hydrochloride) and less than P14,000 in cash that were found among his belongings.

Supt. Peter Madria, Gapan police chief, said the victim had no known enemies nor any record tying him to illegal drugs.

Vendivil’s remains were found by a Makabaklay Bantay Bayan official, Carlito Pablo, who searched for the councilman after seeing the Vendivil’s motorcycle parked on the road shoulder.

A witness saw a tricycle speeding away from the crime scene after hearing a series of gunshots. Forensic investigators said Vendivil was shot five times in the back.  SFM