PILAR, BATAAN—Calling all war veterans his heroes, President Duterte on Sunday ordered the Department of Budget and Management to speed up the release of increases in veterans’ pension totaling P6.5 billion.

Addressing the veterans during the program commemorating the 75th Araw ng Kagitingan at Dambana ng Kagitingan on Mt. Samat here, the President said his administration was giving priority to their entitlements.

“Our surviving veterans have suffered much. They should not suffer more,” he said. “We have settled the backlog in disability pension. We have also made the management of 2,000 pension accounts more efficient.”

The increased pension of retired military personnel will cover 2008 to 2013.

While honoring the veterans, the President said, “War is never worth it.” He said the “painful lessons of war behoove all of us in this community of nations to work for peace and development.”

“We are drawn each year [to] this sacred ground to honor the gallant men and women who [made] the ultimate sacrifice for our nation, our people and our future,” he said.

The President said soldiers who fought in previous wars did not die in vain.

“We owe nothing less than this solemn pledge for all those who sacrificed the most for our country’s freedom. Our veterans went through one of the darkest chapters in world history for the benefit of our generation and generations after us,” he said. “We must never forget that we owe them a deep debt of gratitude.”

Mr. Duterte also cited the country’s alliance with the United States, noting that how the two countries fought together in World War II “must be the basis of present efforts to move forward.” 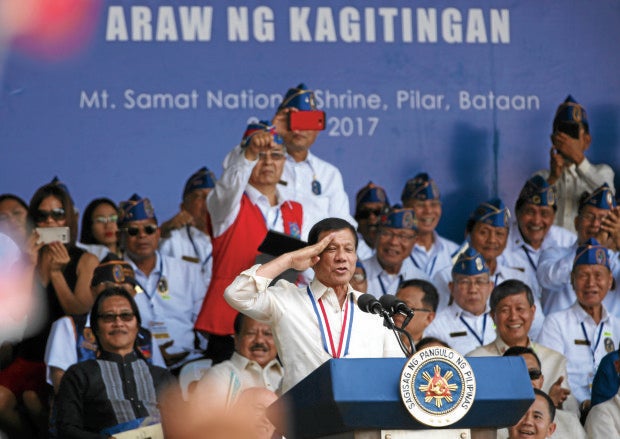 President Rodrigo Roa Duterte goves a snappy salute to the veterans as je leads the observance of 75th year of Day of Valor “Araw ng Kagitingan” at the Dambana ng Kagitingan, Mt. Samat National Shrine, Pilar, Bataan, April 9, 2017. Araw ng Kagitingan pays tribute to the Filipinos who fought in Bataan in defense of freedom and democracy. Despite the trials of defeat, the captured soldiers stood strong and heroes emerged from the event. INQUIRER PHOTO / NIÑO JESUS ORBETA

He described the country’s relations with the United States as a “bright area.”

Speaking ahead of Mr. Duterte’s speech, US Charge d’Affaires Michael Klecheski expressed hope that the celebration would not only be a day of memory but also an opportunity for reflection and commitment to peace.

Kazuhide Ishikawa, Japanese ambassador to the Philippines, who also spoke at the program, quoted Japanese Prime Minister Shinzo Abe in stressing that Japan “will never again repeat the devastation of war.”