“I have received threats that a lawsuit would be filed against me, and there are also people looking for me as well,” Lascañas told the Philippine Daily Inquirer.

Lascañas said the moment he received these pieces of information, it dawned on him that it was better to leave the country “for the time being.”

The retired policeman had requested the Philippine Daily Inquirer to initially withhold his whereabouts as a safety precaution, even if the Philippine government  knew where he was because he properly filled out his immigration form.

But after the Bureau of Immigration confirmed that he left for Singapore, Lascañas agreed that the Philippine Daily Inquirer disclose his location.

The INQUIRER asked Lascañas if he left because he took on the President, simply the most powerful man in the country.

“I’m not confronting him. I was just telling the truth, the whole truth about the killings in Davao, (and about) my involvement, because I want to have a clean conscience,” Lascañas said.

In February, Lascañas made a stunning turnaround from his statements last year at a Senate investigation where he denied involvement in the DDS, as well as allegations made by another self-confessed DDS member, Edgar Matobato.

Lascañas admitted to lying when he first appeared at the Senate, saying he did so out of fear for his family’s safety.

In his press conference on Feb. 20, Lascañas accused President Duterte of organizing the DDS to kill petty criminals and his enemies in Davao City. He was then assisted by his lawyers from the Free Legal Assistance Group (FLAG) led by its national chairman Jose Manuel Diokno, and supported by opposition Sen. Antonio Trillanes IV.

From then on, Lascañas had been provided safe haven by a number of supporters, some of whom helped him in his flight out of the country over the weekend. 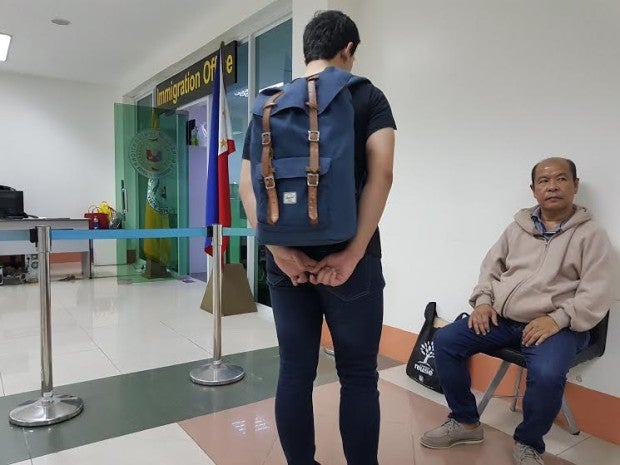 Retired SPO3 Arturo Lascañas, the self-confessed Davao hitman who implicated President Duterte in the vigilante group’s grisly killings, waits at the immigration area before his flight out of the Philippines on Apr. 8, 2017. (PHOTO BY NIKKO DIZON / INQUIRER)

Malacañang had denied the allegations Lascañas made, saying these were part of the plan to “destroy the President and topple his administration.”

Briefly on Saturday, Lascañas thought he would not be able to leave.

He had to wait for around 15 minutes at the airport immigration before his passport was stamped.

“They didn’t talk to me. They just told me to take a seat. They didn’t tell me why,” Lascañas said of the immigration officers.

One of them told the INQUIRER that they had no reason to prevent him from leaving. (The Inquirer took the same flight with Lascañas.)

They just had to “inform” the Bureau of Immigration headquarters that an Arturo Lascañas was at one of the immigration counters.

“The immigration staff were actually polite and even apologetic,” Lascañas said, adding however, that the immigration officer took note of his full itinerary.

He was confident that he should be allowed to leave because he had no hold departure order. He was not even on the immigration watchlist.

On Sunday morning at a rented place, which for now he would call home, Lascañas looked well rested and relaxed.

With his companions and the INQUIRER, Lascañas went out to walk around his new neighborhood and to have brunch.

This was the first time in two months that he was able to walk some distance, and without tight security, he said. Lascañas and his companions navigated their way with pure joy.

To be unafraid was exhilarating for them.

This was his very first time to be out of the Philippines, and Lascañas said he had mixed feelings about it.

With his handkerchief, Lascañas, a man who admitted to have killed hundreds on orders of then Mayor Duterte, wiped away the tears that rolled down his cheeks.

Lascañas knew it would take a long time before he could return to the Philippines.

“I am sure, I might either be jailed or killed. It’s just one of the two possibilities. But for me, I know God has a plan and that would be my destiny for telling the truth. I have accepted that,” Lascañas said.

Being human, he said, he also had fears and uncertainties. “But all that will be overcome by one’s faith. To me, God is my guide. I know (God) will not abandon me,” Lascañas said.  SFM