Bothered by his conscience, confessed hit man Edgar Matobato decided to leave his life to God and tell all in a Senate hearing. Along the way, he found signs of divine assurance: an image of the Virgin Mary in a trash can and a swarm of fireflies glowing in the night
By: Jocelyn R. Uy - Reporter / @mj_uyINQ
Philippine Daily Inquirer / 12:32 AM April 09, 2017

In a secret place where the silence is broken only by the chirping of birds, the crowing of roosters and the gentle rush of a nearby stream, confessed assassin Edgar Matobato tries to make peace with his dark past and with God.

The quiet is deceptive, says the former hit man who finds himself tormented by images of people he had killed as a member of the so-called Davao Death Squad (DDS).

“There are times I cannot sleep for three straight days,” he says, speaking in Filipino with a heavy Visayan accent.  “I think about the people we killed. When I close my eyes, I see them pleading for their lives.” He had contemplated suicide during his darkest moments, he adds.

“It’s hard when you carry a heavy burden. But maybe God is telling me to go back to him and I should stand by it,” he says.

Matobato publicly testified against President Duterte in a Senate hearing last year, claiming that the then Davao City mayor founded the DDS in 1988, initially as a small team of seven called “Lambada Boys,” to kill petty criminals on his order.

The hired gun has since been hiding for his life, sheltered by religious orders which also give him regular spiritual guidance.  In his safehouse, Matobato meditates and listens to Bible stories regularly and keeps himself fit and busy with cleaning chores and by tending a vegetable garden close by.

He was among the first to be recruited into the DDS, says Matobato, adding that he had killed at least 50 people, usually with a gun. He admits that he stayed on with the group because he liked the power that went with being associated with the then Davao mayor, a rare opportunity for an illiterate man like him.

“The mayor picked me even if I were a nobody. It made me happy and proud,” he says. “Para akong galanteng tao. Maski walang akong grado, ang daming rumirespeto sa akin dahil andun ako kay Mayor Duterte (I felt respectable). In Davao, when you’re with the mayor, walang gagalaw sa iyo (you’re untouchable). No one can reprimand you for carrying a gun. Wala, ganyan kami kagalante sa Davao City. I thought life would get better, but I ended up being used to kill people.”

As a young boy, Matobato dreamed of becoming a soldier. But the dream was crushed when his father, then a member of the Civilian Home Defense Force (CHDF)—a paramilitary force active during the Marcos years—was beheaded in front of him by members of the New People’s Army in 1977.

Following his father’s untimely death, Matobato had to stop schooling. He was then a Grade 1 student who attended class only once a week because of the 14-kilometer trek to and from school.

He recalls leaving home at 5 a,m. so he could be in school by 7, carrying his uniform and shoes wrapped in plastic to avoid soiling them during his trek.

He would don his uniform only when he was near the town proper.  His teachers also allowed him to leave school an hour earlier than his classmates, at 3 p.m. so he could be home before sunset.

After his father’s death, Matobato became the family breadwinner, doing all sorts of jobs to be able to send his brother and sister to school and provide food for the household. When he turned 23, he became a member of the CHDF and was later recruited by the Citizen Armed Force Geographical Unit (Cafgu).

“Because I had a good record as a member of Cafgu, I was picked by Mayor Duterte to be part of his group,” he says.

Matobato’s first kill was a suspected snatcher. He remembers getting drunk after his first assignment that night. “I couldn’t sleep. It was something new to me. Syempre, nakapatay ka ng tao (You’ve killed someone).” he says.

He adds: “Nakikita ko yung mga kasamahan ko, mga kababaihan ang pinapatay. Andoon ako pero nakokonsyensya din ako. (I saw the others killing women. I was there but my conscience started bothering me).”

To assuage his guilt, he told himself he was only following orders. “In Davao City, you cannot kill without clearance, or you’ll end up in jail,” he says. 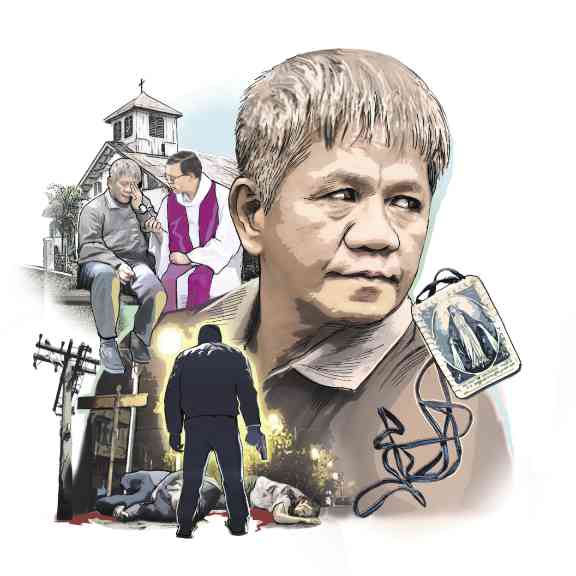 By his account, it was in September 2013 when he decided to bolt from the DDS. He had been carrying a troubled conscience for far too long and wanted to live his remaining years doing a dignified job.

While the first nine months of his “new life” were a breeze—he was earning a modest income as a security escort to some businessmen in the city—Matobato eventually realized that the path to conversion was a long and tough ride that also meant being on the run.

On June 19, 2014, he was arrested for the death of businessman Richard King. Matobato claims to have been tortured by the Davao City police for a week because he had refused to take sole responsibility for King’s murder.

The physical abuse impaired his right ear and damaged a vein in his buttocks, he says. (In September 2016, the Department of Justice cleared Senior Supt. Vicente Danao Jr. and SPO 1 Reynato Medina of violating the Anti-Torture Act).

A cousin, a retired colonel, used his connections to get Matobato out of detention. He was advised to leave Davao City if he wanted to live.  Two days later, he and his common-law wife did, leaving behind his five children from a previous marriage.

From Davao to Cebu, the couple went to Samar and stayed with a relative.

It was here where they wrote then justice secretary, now senator, Leila de Lima and asked for help.

When nothing much came out of that, they took a bus to Manila to try their luck with broadcaster Ted Failon.  Discouraged by the long queue at the TV network, they took the next bus back to Samar.

On Aug. 21, 2014, Matobato decided to surrender to the Commission on Human Rights (CHR) in Eastern Visayas, where he told CHR officials everything he knew about the DDS. He was advised to enter the Department of Justice’s witness protection program (WPP) for his safety.

“When I decided to come out and expose what we did in Davao City, that was when I entrusted my life to God. I was ready to die but not before the people learned the truth,” he says.

A Catholic, Matobato says he stopped going to church when he joined the DDS. “I thought, ‘What’s the use of going when you’d be ordered to kill later?’”

But his two-year stay in the WPP helped rekindle his relationship with God. There, he had his first confession after a long time and started hearing Mass again.

Despite being transferred from one safehouse to another, he and the others in the WPP program were shuttled to a church nearby every Sunday to hear Mass and attend a retreat.

“I started to look forward to Sundays,” he says, adding that he also befriended priests along the way.

But it was a few days before his 56th birthday in June 2015 that he got some sort of divine assurance, says Matobato. He found a small image of the Blessed Virgin Mary in a garbage can while disposing of trash from his room.

A strange sense of joy overcame him when he retrieved the image. “I felt it would provide me the guidance I needed,” he recalls. He now carries the image wherever he goes, securing it on a bed of cotton inside a small case that used to hold his partner’s manicure set.

When it became clear that Mr. Duterte was going to win the presidential elections last year, Matobato decided to drop out of the WPP program and seek solace in the Church. “I realized that in the end, it’s the Church that will give me comfort, no matter how bad I am,” he says.

Matobato’s common-law wife sees his journey as part of God’s divine plan for his renewal. She recalls a swarm of fireflies suddenly glowing over their heads on a dark night just before he was to appear at the Senate last year.

“We had been staying at that safehouse for a month and had never seen one firefly. But on that particular night, they were flying above us. It was like a sign of enlightenment,” she says.

With the recent Senate testimony of his “superior,” SPO3 Arturo Lascañas, confirming

his own disclosures, and news that at least four more members of the dreaded DDS were

coming out, Matobato believes that they too have been touched by God.

“It’s not impossible for people like us to seek renewal and to change for the better,” he says.