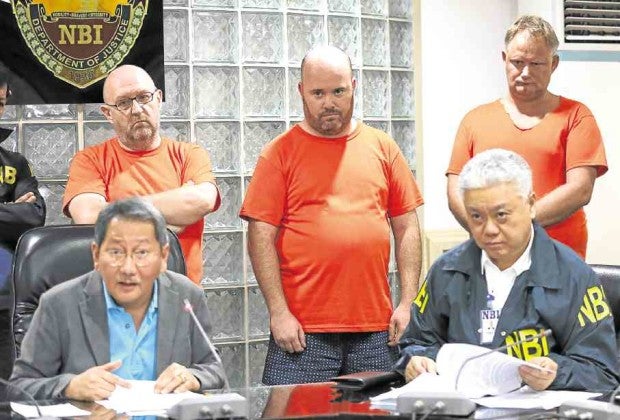 British nationals Graham Allan Bennet, Andrew Robson and Dominic Whellams are presented at the NBI following their arrest in Carmona, Cavite, on Wednesday. Thirty-five of their Filipino personnel were also rounded up for alleged sale of nonexistent bonds and securities to investors outside the country.—LYN RILLON

The National Bureau of Investigation arrested three British nationals, along with 35 local personnel, for allegedly running an investment scam from a Cavite-based company.

A press briefing at the NBI headquarters in Manila on Friday presented Andrew Robson, Graham Allan Bennet and Dominic Whellams, who were arrested by an anticybercrime team at their office at 88 Building on Governors Drive, Carmona, on April 4.

Robson was a company consultant while Bennet and Whellams served as trainer and IT expert, respectively, at Plustel Solution Inc.
The bureau said they would be charged for violation of the Securities Regulation Code in relation to the Cybercrime Prevention Act of 2012.

“Verification with the SEC (Securities and Exchange Commission) revealed Plustel’s lack of authority to offer securities, there being no prior application for secondary license from the commission,” the bureau said in a statement.
“The company [does this] through its responsible officers and focal personnel to sell nonexistent bonds, securities, debentures and similar products to nonsuspecting investors outside the Philippines.”

Explaining the company’s operations, the bureau said Plustel tele-qualifiers assess their prospective victim’s financial capacity and willingness to invest over the phone.

Results deemed favorable to the scheme are forwarded to the verifiers “who gauge the probability of an investment sign-up.”

The financial information on the victim will be forwarded to the loaders who will ensure that the investors “part with their money in exchange for nonexistent securities, to their damage and prejudice.”

Along with the British nationals, 35 Filipino employees allegedly caught in the act of selling securities were placed under arrest, while 172 others working as data miners, qualifiers and verifiers were also brought to the NBI for investigation and verification.

They were said be engaged in so-called boiler room operations, which, according to SEC Director Jose Aquino, is a way of solicitation or selling of securities using high-pressure sales tactics.
Boiler rooms are often set up in inexpensive office spaces, where telemarketers make calls to randomly selected prospects.WITH A REPORT FROM TETCH TORRES-TUPAS, INQUIRER.NET