TRIPOLI — The Muslim festival of Eid al-Adha is just around the corner, but Ismail doubts he can afford a sheep, whose sacrifice and sharing with family, friends and the poor is central to the feast.

Prices in the Libyan capital have “skyrocketed, and I don’t have access to all the money in my bank account,” says the father of five.

“If I buy the sheep, I won’t have any money left for the rest of the month.” 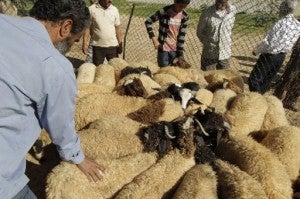 Tripoli and the regime of strongman Moammar Gadhafi fell at the end of August, and life has begun returning to normal in the Mediterranean seaside capital.

But Ismail’s plight is common in an economy where cash is still short and where, after thousands of migrant workers fled during months of fighting, there is a serious labour shortage.

At the same time, many of the foreign investors who also fled the violence have yet to return.

As cranes lie idle at dozens of construction sites, thousands of Libyans are without work, while others, though employed, are unpaid.

Eid al-Adha, the feast which caps the annual Muslim pilgrimage, or hajj, to Mecca, will be celebrated on Sunday. Now, Tripolitans are forming lonq queues outside banks, hoping to withdraw a small portion of their deposits.

English teacher Amina el-Badri wasn’t paid for months, and when she finally got her salary for October, it wasn’t the full amount.

On Al-Jumhuriya Avenue, not far from Gadhafi’s former complex and residence, the bullet-riddled windows of banks witness to the fierce fighting that led to the dictator’s downfall.

But one banker, trying to mollify a client, says “it’s not just a problem of money. There is no one to replace the windows. All the labour force has left.”

In August, the International Organisation for Migration estimated that 600,000 migrant workers, people who worked in markets, construction and other basic sectors, had fled the country.

The vice president of the ruling National Transitional Council (NTC), Abdel Hafiz Ghoga, recently said the cash shortage would be resolved once confidence was restored between banks and businesses.

He did not say how that would come about.

Despite all the problems, life is slowly returning to normal after months of NATO bombings and severe shortages of power, water and fuel.

Al-Shat Avenue, which runs along the seafront, is again suffering from its habitual traffic jams, sports cars mixing with NTC pick-ups.

Young people and families are recovering the simple pleasure of strolling through the residential and commercial district of Gargaresh, where shops and boutiques are reopening and music fills the air.

Tripoli’s largest shopping center, Souk Al-Thulatha, has also reopened and displays are filling up little by little as imports return to the market.

But perhaps most importantly, fewer and fewer weapons are being seen on the streets, with the occasional deadly clashes between rival units of the former rebels now a rarity.