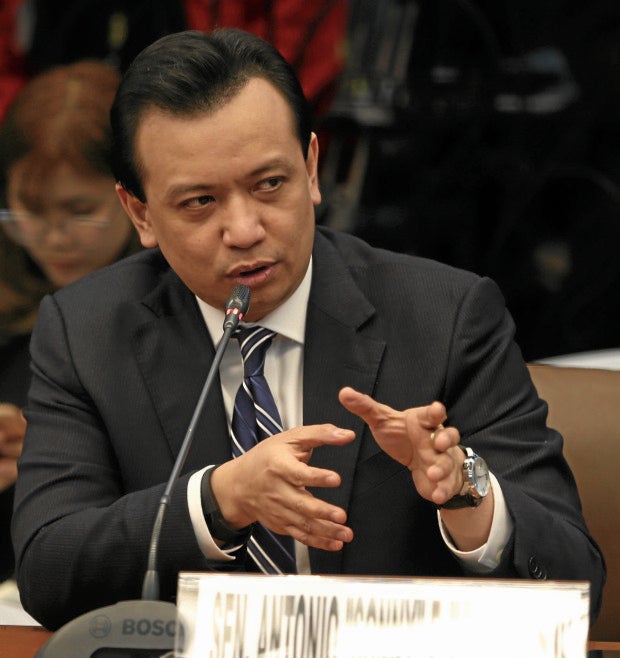 An organized group of land grabbers that was granted free government housing intended for the police and the military is a front organization of communists, Sen. Antonio Trillanes IV said on Thursday.

Trillanes was referring to the well-organized Kalipunan ng Damayang Mahihirap or Kadamay, whose members were given government housing projects in Pandi town and San Jose Del Monte City in Bulacan province by President Duterte last Tuesday.

The senator said Mr. Duterte was actually being surrounded by members of the Central Committee of the Communist Party of the Philippines whom he said were “dictating policies” in the government. He said the President was aware of it.

“The President is trying to balance things out because the armed forces would get mad,” Trillanes said at a news conference in the Senate.

The senator provided the Inquirer a list of 11 senior members of the CPP/New People’s Army/National Democratic Front who were part of the Duterte administration, including Executive Secretary Salvador Medialdea and Labor Secretary Silvestre Bello III, who happens to be chair of the government peace panel in peace talks with the NDF.

Trillanes said he got this list from military sources.

As per the list he provided, Medialdea was identified as a CPP full member while Bello, an “active national democrat.”

On the free government housings for Kadamay, Trillanes warned that the community may be used as a “sanctuary” or “safe haven” of communist rebels as he noted that Bulacan was just near Metro Manila.

Trillanes said he understood the need for the government to help the poor but the grant of free housing to this group might also set a bad precedent.

Meanwhile, the President told reporters in Palawan that while he has decided to give Kadamay members the government housing units they have occupied in Bulacan, they should not do the same thing again.

“They would not be able to do it again because the next time that I will build the houses for the police and the [soldiers], I will have five M60s and a bazooka guarding it,” he said.

He said he was just being patient with the Kadamay members because they were poor.

Addressing soldiers at the Western Command in Palawan, Mr. Duterte also sought their understanding for his decision to give the government housing units to the poor members of Kadamay to avoid bloodshed.