The Anti-Money Laundering Council (AMLC) has rejected the request of Sen. Antonio Trillanes IV to release “all flagged/reported” bank transactions of President Rodrigo Duterte, saying it would violate the Bank Secrecy Law.

“We regret to inform that your request, which necessarily includes transactions on President’s bank accounts, is not allowed under Republic Act No. 1405 or the Bank Secrecy Law,” the AMLC said in its letter to Trillanes dated March 29, 2017, a copy of which was furnished to reporters by the senator on Thursday.

The AMLC pointed out that under the law “all bank deposits and all transactions related thereto, are absolutely confidential and may not be inquired into by any person, government official, bureau or office, subject only to a few exceptions not present in this case.”

“Acceding to your request would therefore violate said law and subject the offender to criminal penalties,” it said.

The AMLC also pointed out that while it has the authority to conduct a bank inquiry, under the Anti Money Laundering Act of 2001 (Republic Act No. 9160), the council could only exercise such power when investigating an unlawful activity or a money laundering offense.

The AMLC’s letter was in response to Trillanes’ request letter dated Feb. 21, 2017. /atm/rga 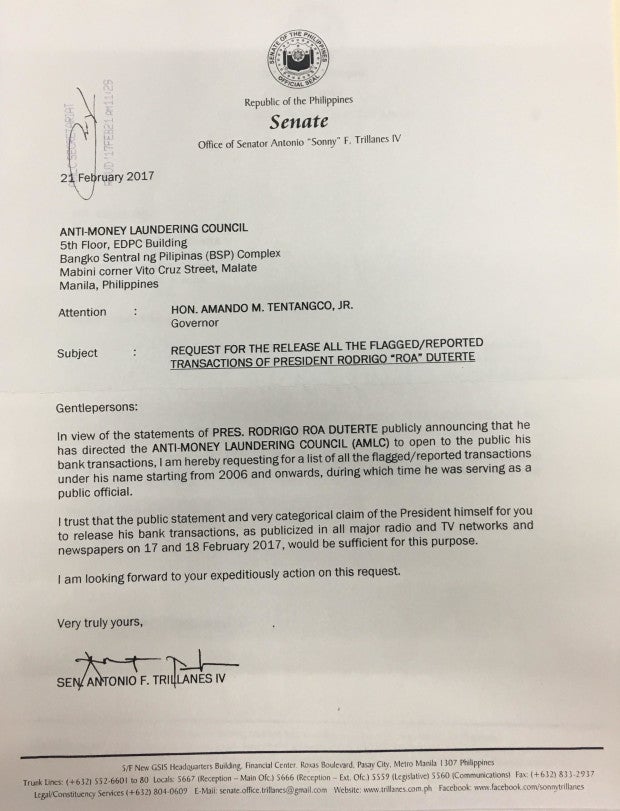