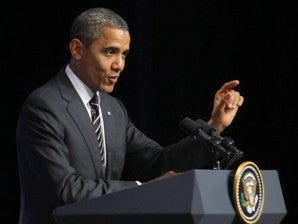 US President Barack Obama speaks during a media conference at a G20 summit in Cannes, France on Friday, Nov. 4, 2011. Leaders from within troubled Europe and far beyond are working Friday on ways the International Monetary Fund could do more to calm Europe's debt crisis. (AP Photo/Michel Spingler)

CANNES, France — Conceding a fragile global recovery and plodding job growth back home, President Barack Obama said Friday he is confident European leaders are fixing their ominous debt crisis, which threatens to undermine the U.S. and his own shot at a second term.

A year shy of the election, Obama said the American economy is growing, but “way too slow.”

The president capped his role at a brisk G-20 summit essentially where he started it, offering solidarity to his European peers with none-too-subtle signals it was their responsibility to clean up the economic mess in their own backyards.

At issue is an evolving rescue package across the 17 nations sharing the euro as their common currency. The plan could prevent a default in Greece, put up a financial firewall against future trouble and reassure markets about the credibility of the euro.

“I am confident that Europe has the capacity to meet this challenge,” Obama said in a news conference at the meeting of leading industrialized and developing countries.

“I know it isn’t easy, but what is absolutely critical — and what the world looks for in moments such as this — is action,” he said. “That’s how we confronted our financial crisis in the United States.”

The drama of Greek’s messy internal struggles and their potential to derail the entire European effort hung over the summit in this French Riviera resort, as did a gloomy rain.

While Obama met with world leaders, a new jobs report showed that the American economy added 80,000 jobs in October and that the job expansion in the previous two months was better than first thought.

The unemployment rate dropped slightly to 9 percent. Should it remain anywhere close to that level a year from now, Obama will face re-election with the highest jobless rate in recent times.

“The least of my concerns at the moment is the politics of a year from now,” Obama said. “I’m worried about putting people back to work right now because those folks are hurting and the U.S. economy is underperforming.”

He cast the jobs report as positive but said the pace of the recovery shows “once again that the economy’s growing way too slow.”

Obama repeatedly tried to keep the focus on his confidence that Europe is on its way to solving its financial woes. “I can say that we’ve come together and made important progress to get our economic recoveries on a firmer footing,” Obama said.

Still, important questions had not been answered. Leaders of the economic powers did not agree on how to increase the firepower of the International Monetary Fund to help stem the European debt crisis.

Obama acknowledged that there is hard work left to do. But he said Europe had a foundation with the right elements: a way ahead for indebted Greece, a credible firewall to contain the crisis and a plan to strengthen European banks.

“All of us have an enormous interest in Europe’s success and all of us will be affected if Europe is not growing, and that certainly includes the United States,” Obama said. “If Europe isn’t growing, it’s harder for us to do what we need to do for the American people: creating jobs, lifting up the middle class and putting our fiscal house in order.”

Obama even extended some political sympathy, reminiscing about the economic difficulties he faced upon taking office in 2009.

Instead of working with a single legislative body as he did, Obama noted that there are multiple parliaments, commissions and institutions involved in solving Europe’s crisis. He said some of his counterparts joked that he had gotten a crash course in European politics in the past couple of days.

What Obama was not, clearly, was the center of attention here. The United States came into this gathering in a supporting role.

He talked economic cooperation with Argentine President Cristina Fernandez and congratulated her for recently winning re-election. He joined the summit host, French President Nicolas Sarkozy, in saluting service members from both their countries who fought in a NATO-led campaign that drove Libyan leader Moammar Gadhafi from power.

Here, too, to a French audience, he promoted his jobs bill at home, arguing that it could help fuel American growth and European exports.

Sarkozy praised Obama in the interview in a way that amounted to a criticism of Obama’s predecessors.

“Why are we working so well with President Obama?” Sarkozy said. “Because for so long now, we haven’t had a United States of America so attuned to the problems of others, so determined to work as part of a team with Europe.”

Stalled joblessness poses significant problems for Obama, who has been unable to get Republican support for elements of his $447 billion jobs plan.

“As soon as I get some signal from Congress that they’re willing to take their responsibilities seriously, I think we can do more,” the president said. “But that’s going to require them to break out of the rigid ideological positions that they’ve been taking. And the same is true, by the way, when it comes to deficit reduction.”

Obama was on his way home Friday, but not for long. He is to leave on Nov. 11 for another economic summit, in Hawaii, before traveling to Australia and Indonesia.

Angela Charlton contributed to this report.