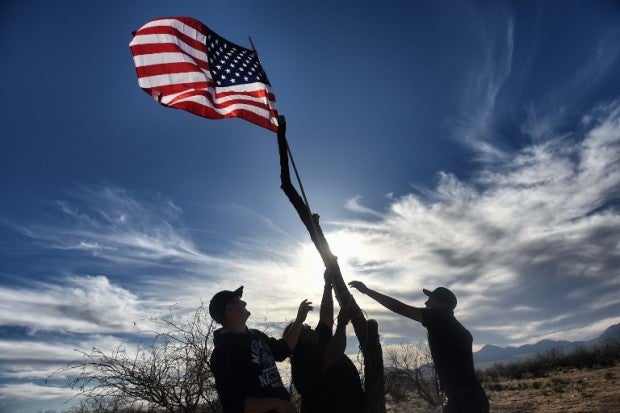 Indigenous people from the Tohono O’odham ethnic group take part in a protest against US President Donald Trump’s intention to build a new wall in the border between Mexico and United States, on March 25, 2017, in the Altar desert, in Sonora, in the border with Arizona, northern Mexico. AFP

Apprehensions of people trying to sneak into the United States, seen as an indicator of the total flow of undocumented immigrants, dropped to 16,600 in March, down 30 percent from February and 64 percent from a year ago.

Kelly told the Senate Committee on Homeland Security that there was even a sharper fall in the number of families and unaccompanied children crossing the border.

“We’ve seen an absolutely amazing drop in the number of migrants coming out of Central America,” he said.

The decline comes after a surge in the last three months of 2016 that appeared to be a reaction to the looming crackdown Trump promised in his presidential campaign.

Trump has pledged to expel the estimated 11-12 million undocumented immigrants in the United States, the largest portion of them from Mexico.

Many have been in the country for decades, raising families, building businesses and buying homes.

The White House said the fall in the number of people sneaking into the country was the result of Trump’s policies.

“By achieving real results on illegal immigration, once again, President Trump is keeping his promises to the American people,” press secretary Sean Spicer said in a statement.

“This decrease in apprehensions is no accident,” Kelly said.

“It won’t last unless we do something to secure the border, a wall or physical barrier.”

The Department’s US Customs and Border Protection unit has added personnel and money to policing the 2,000-mile (3,200-kilometer) border.

But Trump has pledged to build a wall along the entire frontier to halt the flow of people — largely from Mexico, El Salvador, Guatemala and other impoverished Central American countries — into the US.

Plans for the wall are just getting underway, and Kelly acknowledged that a physical barrier along the entire route is not feasible or practical.

Instead, the additions to border control could involve a combination of physical barriers, electronic monitoring and more patrols.

“It is unlikely that we will build a wall, a physical barrier, from sea to shining sea.”

“All we know is that physical barriers do work if they are put in the right places.” CBB