Thousands of homeless families who faced eviction for occupying idle units in six government housing projects in Bulacan province last month are going to keep the houses after all.

President Duterte on Tuesday said he would give members of the urban poor group Kalipunan ng Damayang Maralita (Kadamay) the government houses in Bulacan, and asked military and police personnel, supposed to be the original beneficiaries, to let go of the units.

In turn, Mr. Dutere promised to build better houses for members of the police and the military by December, as he sought understanding for the poor.

As of March 20, 5,262 houses had been occupied by Kadamay members in housing projects in Pandi town and San Jose del Monte City, said the National Housing Authority (NHA), which administers the housing projects.

“Let’s not trouble the people there because they’re fighting back. Their only sin is really, they are poor like us,” Mr. Duterte said at the 120th anniversary celebration of the Philippine Army in Fort Bonifacio on Tuesday.

“I will give you better houses, more expensive, more comfortable and more spacious,” he added.

The President said he would supervise the new housing project for the police and soldiers himself and make sure these had running water and electricity.

The tone of the President’s statements on Tuesday was a departure from that of his statements last month, when he said the homeless families that occupied the Bulacan houses must follow the law or he would be forced to remove them from the area.

“That’s good. But it should be written down. They have to issue that document because that statement could be taken back anytime,” Kadamay chair Gloria Arellano said.

“We will not celebrate yet. We will not yet offer our gratitude [until we are given the rights to the houses],” she said.

Arellano said Mr. Duterte’s openness was a “big triumph” for the urban poor. But she also expressed hope that the President would look at the overall problem of homelessness in the country. 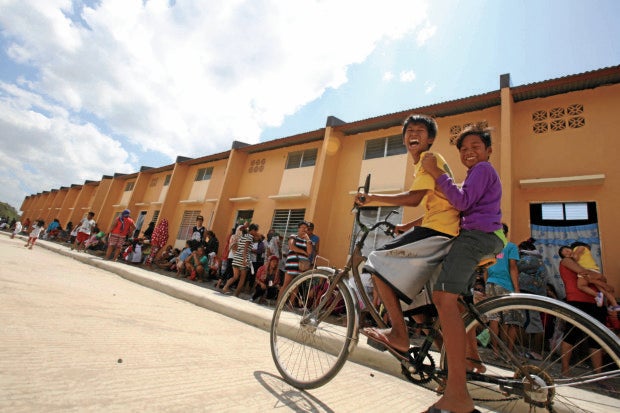 “So many houses that are built by the government remain unoccupied,” she said. “We hope that they just distribute it to the homeless poor.”

The Kadamay occupation of the government housing project in Bulacan highlights the country’s severe housing backlog, estimated at 5.56 million.

The NHA is the sole government agency tasked with building shelters for 1.5 million homeless families, which grow at a rate of 3.4 percent annually.

Addressing Kadamay members, Mr. Duterte said they should not trouble the police or soldiers who were already living in the government housing units.

“Eventually, they will be removed and transferred to a new unit that is better than the one you took from them,” he added.

Mr. Duterte sought understanding from the soldiers as he defended his decision to give the houses to Kadamay members.

“Well, anyway, I said I’m asking you, if possible, do not be offended. Take it with an open mind, I myself, your President, am pleading with you: ‘Let us not wage a fight against our own people. Since they are poor, try to understand them,’” he said.

Mr. Duterte said he did not want to use force because it would just result in violence.

“Do not pick a fight. It would be useless. And then the police have guns, and you know, something could go awfully wrong. Let us let it be,” he said.

Mr. Duterte said he had asked the NHA, which had the money to build the new houses, to look for a suitable land for these.

He said he could even give the houses furnished with a bed.

Last week, the NHA lifted the eviction orders it issued against the families after Kadamay members agreed to submit to a validation as housing applicants.

Arellano hoped that the President’s pronouncement would cover other abandoned housing units that they occupied in Bulacan, not only those intended for policemen and military personnel.

“The houses should be directly awarded to those who occupy them,” said Kadamay spokesperson Michael Beltran.

Beltran said the question remained whether the urban poor beneficiaries would be made to pay for the houses, as with other relocation programs.

Many of the occupied houses have no doors, windows and toilets.