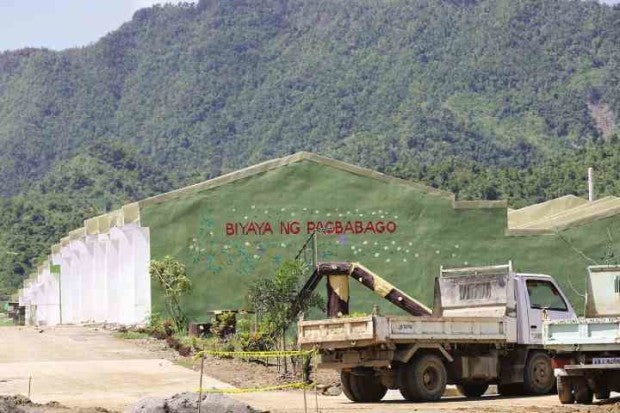 TACLOBAN CITY—The National Housing Authority (NHA) is asking for more time to complete the construction of all housing units for survivors of Supertyphoon “Yolanda” (international name: Haiyan) after it failed to meet the March deadline set by President Duterte.

Dorcas Secreto, NHA Eastern Visayas regional estate management specialist, said bad weather prevented the agency from meeting the President’s deadline but assured that the agency would be able to deliver the remaining 2,700 housing units before the end of April so these could be turned over to beneficiaries.

The agency is expecting to complete the houses in 19 resettlement sites in the northern part of the city by April 12.

Secreto said NHA-designated developers built 11,606 housing units for Yolanda survivors as of March 30, of which
only 8,339 were completed. Of those completed, only 7,479 were occupied.

She said the NHA was supposed to construct 14,333 units intended for families who lost their houses after Yolanda pummeled Tacloban City in November 2013.

On Nov. 8 last year, during the commemoration of the onslaught of Yolanda, Mr. Duterte ordered officials to complete the construction of new shelters for the survivors within a month.

But when the President returned to the city in January, a month after the deadline, more than 8,000 families were still waiting to be relocated to permanent shelters, away from danger zones.

Unhappy over the snail-paced transfer of families displaced by Yolanda, the President gave concerned agencies until March to make sure that the remaining 8,816 families would already be in permanent shelters.

“The developers were aware of the presidential directive but because of poor weather (they were not able to finish work in these houses),” Secreto said, noting that rains had disrupted the schedule of mixing cement needed for these houses. —WITH INQUIRER RESEARCH