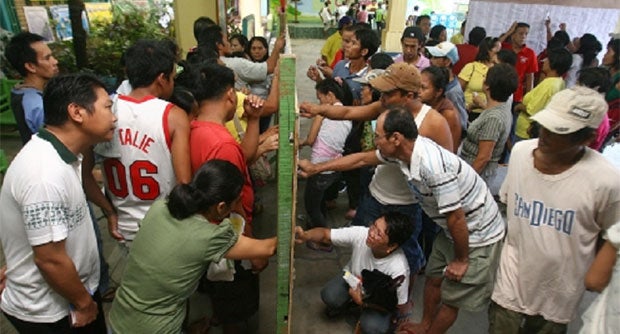 A scene from the 2010 barangay elections  (NQUIRER FILE PHOTO)

NAGA CITY — In a collective motion, the city council here opposed, on Tuesday, President Rodrigo Duterte’s plan to postpone the barangay elections this year and appoint punong barangay (barangay or village chairmen) on the basis of information that 40 percent of them have been found involved in illegal drugs.

Resolution No. 2017 of the Naga City Council stated that the idea of President Duterte appointing village chiefs “runs counter to the essence of democracy and hearing the voice of the Filipino people, from whom sovereignty resides and all government authority emanates.”

Vice Mayor Nelson Legacion said the decision to officially oppose the appointment of village chiefs was the result of the clamor from village officials who wanted the elections rather than appointment of officials of the villages.

The resolution also questioned Mr. Duterte’s claim of “the supposed widespread narco-politics in the country,” saying it “remains unsubstantiated and unfounded to the present.”

“If the raison d’etre behind the proposal is to get rid of those barangay leaders involved in drugs, the proper course of action is not to punish the people and disenfranchise them of their rights to suffrage, but to charge those concerned officials before the courts and let due process administratively, criminally punish them,” the resolution said.