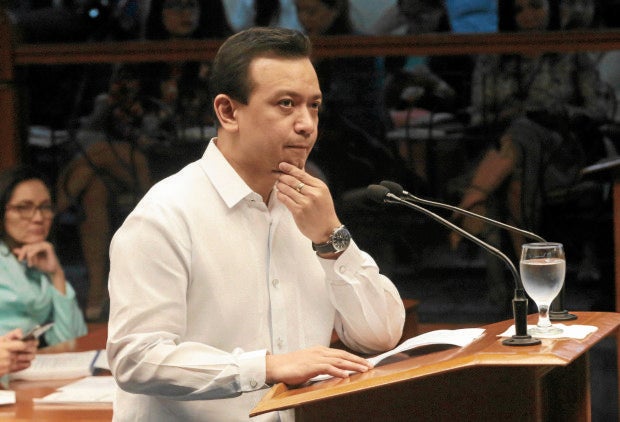 The minority group in the Senate has agreed to oppose at least four measures being pushed by President Rodrigo Duterte and his allies, Senator Antonio Trillanes IV said on Tuesday.

Trillanes identified the four as the proposed restoration of the death penalty, lowering of the minimum age for criminal liability from 15 to 9 years old, postponement of the barangay elections scheduled this October, and any move to change the Charter.

Of the four measures, only the death penalty bill had been approved so far at the approval of the House of Representatives.

Trillanes was almost certain that the proposed deferment of the barangay elections would not be approved at the Senate, saying even some members of the majority bloc were not in favor of it.

“So malabo ‘yan (It’s unlikely). The barangay elections for all intents and purposes would push through by October,” he said.

The senator said the minority bloc would not also agree that Congress should convene as Constituent Assembly to propose amendments to the 1987 Constitution unless it is clear that the Senate and the House would vote separately.

“Definitely hindi ‘yan lulusot (This definitely won’t push through). And we will also not allow ourselves to be convened as a Constituent Assembly unless and until ma-clarify yung voting process (the voting process is clarified). It should be separate,” Trillanes said.

He said the minority group headed by Senator Franklin Drilon reached the agreement on the four measures before Congress went on a break last March 15. It will resume its sessions on May 2.

Aside from Drilon and Trillanes, the four other minority members are Senators Bam Aquino, Francis “Kiko” Pangilinan, Risa Hontiveros and Leila de Lima, who has been detained at Camp Crame over drug charges. JE