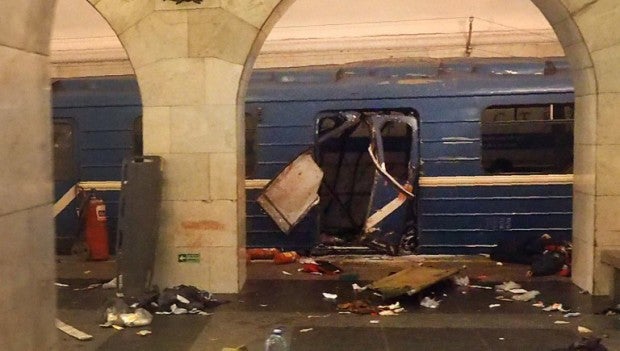 A picture shows the damaged train carriage at Technological Institute metro station in Saint Petersburg on April 3, 2017.
Around 10 people were feared dead and dozens injured Monday after an explosion rocked the metro system in Russia’s second city Saint Petersburg, according to authorities, who were not ruling out a terror attack. AFP

SAINT PETERSBURG, Russia — The blood-drenched bodies of the wounded lay on stretchers as Saint Petersburg residents stayed glued to their mobile phones, desperate for news from loved ones.

Russia’s second city is in shock and mourning after Monday’s suspected terror attack at a busy metro station.

“I’ve never seen anything like it,” said 20-year-old student Sergei Antonov, visibly shaken after the blast that killed 10 people and injured many more. “It looks like an attack.”

A helicopter circled above the Technological Institute metro station, a key transport hub, where the blast took place at 2.40 pm (1140 GMT).

The “act of terror” theory was boosted when an unexploded bomb was discovered and made safe at a second metro station in the city center.

“I’ve called everyone I know in case they were in the metro, thank God they’re all alive,” said Svetlana Anatolievna near the scene.

Television images and social media posts told of the horror that unfolded underground: a train carriage with the doors blown out, dead bodies on the platform, passengers trying to pull victims from the rubble.

“There was lots of smoke and the smell of burning. Everyone panicked and was running and crying,” said one 19-year-old man who did not want to give his name.

He managed to get up the escalator and onto ground level where “the station guard got everyone out and told us the station was closed.”

For some passengers, there was panic as they struggled to get out of the train. “The doors wouldn’t open. Through the window I saw four bodies,” pensioner Viatsheslav Vesselov told AFP.

Several main roads were closed to regular traffic to allow ambulances to ferry the dozens of injured to hospitals, and the metro system stayed shut for several hours.

For the people of Saint Petersburg it was a brutal return to tragedy.

In October 2015 an Airbus plane — mostly carrying holidaymakers heading home to the city — was brought down by a bomb shortly after taking from the Egyptian resort of Sharm el-Sheikh. All 224 people onboard were killed.

Saint Petersburg authorities have announced three days of mourning following the carnage on the metro, and by evening flowers and candles were piling up outside the Technological Institute metro station as well as the Sennaya Ploshchad stop, which the ill-fated train left shortly before the explosion.

“Any one of us could have died in the place of these people,” said Andrey Semenov, 21. “It’s awful, no one is safe.”

Marina Ilina, 30, said her thoughts had quickly flown to the safety of her loved ones.

“I immediately began thinking about my child,” she said. “Now I’ll think twice before taking the metro. Before, in Saint Petersburg, we thought that this kind of thing didn’t concern us. The town is threatened. We must be very vigilant.”

Security has been boosted at stations and airports throughout the country following the blast. CBB