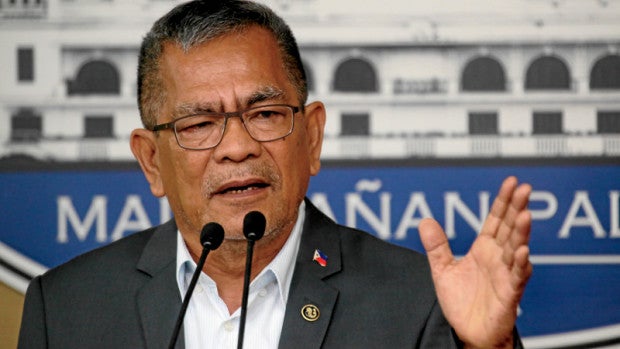 Interior Secretary Ismael Sueno on Monday vehemently denied allegations that he was enriching himself while in office.

Sueno denied the allegations in a confidential letter that was reportedly sent to President Duterte by the Mayor Rodrigo Roa Duterte-National Executive Coordinating Committee (MRRD-NECC), the national volunteer organization that campaigned for him during last year’s elections.

“Until now, my advocacy against corruption remains strong. President Duterte and I share the same beliefs and position against it. That is why the accusations against me are impossible,” Sueno said.

Hotel belongs to his brother

He said the hotel in South Cotabato mentioned in the letter belonged to his younger brother, a longtime businessman, and that the trucks were owned by his daughter, who was in the trucking and rice business.

Sueno admitted that the farm reported in the letter belonged to him but added that, because of his flourishing duck business, he was now able to make improvements to the property.

He also said reports accusing him of accepting money from illegal gambling rings through a certain Senior Supt. Sintin were “preposterous” because he had “always said no to illegal gambling since Day One” as head of the Department of the Interior and Local Government (DILG).

Sueno said he believed the letter was initiated by his three undersecretaries—John Castriciones, Jesus V. Hinlo and Emily Padilla.

He said they were “piqued” because their powers were clipped under a new policy delegating authority that he issued last week.

Sueno said they were “resentful” because he had to reassign some of the workload and projects to other undersecretaries “since nothing happened to the programs given to the said officials and nothing much is moving in terms of accomplishments.”

“It’s said because we were together in the MRRD-NECC. It appears that from the very start, they want my head and are out to discredit me because they want somebody else to head the department,” Sueno said.

Castriciones denied that he and the two other undersecretaries were after the head of Sueno.

He said he, Hinlo and Padilla had wanted to ask Mr. Duterte to quietly investigate the graft allegations against Sueno, but the DILG chief decided to go public.

“Well, it’s already out in the open. He was the one who [disclosed] it. We were trying to ask the President to look into the allegations, but [Sueno] was the one who spilled the beans in public,” Castriciones said in an interview on Monday.

Sueno had asked Mr. Duterte to remove the three undersecretaries, accusing them of working to have him replaced with Technical Education and Skills Development Authority Director General Guiling Mamondiong.

“That’s not true,” Castriciones said. “Even before this incident, smoke [could] already be seen that he [would] be replaced.”

Sueno said Undersecretary Austere Panadero, Assistant Secretary Ester Aldana, and Head Executive Assistant Josephine Leysa, who were mentioned in the letter, were all career officials and had been “faithfully serving” at the DILG for several years.

“The elections ended a long time ago. Politics was not involved when we gave assignments to our officials. The issue here is about being upright, competent and dependable,” he said.

He said the appointment of the three undersecretaries were not initially welcomed by the DILG’s organic personnel because they were “bullying and pushing people around.”

But Sueno said he gave them “another chance to reform their ways,” adding that he did not want infighting within the organization.

Sueno also made it clear that he never told the undersecretaries that their loyalty should be for him, and not for the President.

“This is a big lie. My prayer has always been for God to make me humbler than I was on Monday. I have always recognized the authority of the President and in the same way, I have encouraged my officials to do the same,” he said.

Sueno said he would not cling to his position and that he served “at the pleasure of the President just like other Cabinet officials.

“Whatever the President’s decision may be, I believe that it will be a wise one,” he said.

Sueno hinted that the three undersecretaries were involved in graft, but Castriciones denied this, saying Sueno was trying to “turn the tables” on them.

Castriciones said it was Sueno who should explain the issues, particularly the purchase of firetrucks from Austria, costing the government P20 million when there were alternatives that could be bought at only P7 million.

“We cannot close our eyes to these allegations. We were hoping an appropriate body would investigate but he came out in public and so he has to face all these issues right now,” he said.

Sueno said he was leaving it up to Mr. Duterte to decide the fate of the three undersecretaries, adding that he would strip them of their responsibilities.

Castriciones said Sueno had already removed his and the two other undersecretaries’ responsibilities.

“He deprived us of our ranks. I’m undersecretary for operations so I should be in charge of finance, administration and legal matters, but, you know, he took these away,” Castriciones said.

Hinlo, undersecretary for public safety, said he, Castriciones and Padilla had already raised their concerns about Sueno to Mr. Duterte.

“We are awaiting the immediate decision of the President for the best interest of the DILG and the Filipino people,” Hinlo said by phone on Monday. “Hopefully the matter can be resolved by Tuesday.” —WITH A REPORT FROM CARLA P. GOMEZ