DOJ to probe deal between Floirendo’s firm and BuCor 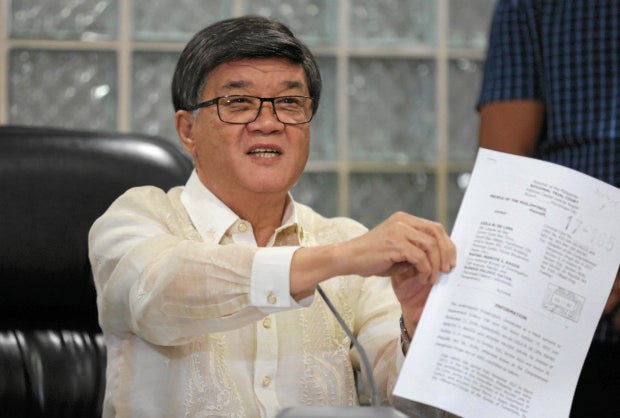 The Department of Justice (DOJ) will conduct an investigation into the reported questionable deal between the Bureau of Corrections (BuCor) and the Tagum Agricultural Development Company owned by Davao del Norte 2nd District Representative Antonio Floirendo Jr.

Justice Secretary Vitaliano Aguirre said he will create a team to study the deal.

“We received this morning a letter from House Speaker [Pantaleon] asking for a legal opinion on the legal status of the 5,300 hectares of portion of the Davao Penal Colony (now Davao Prison and Penal Farm) leased to Tadeco,” Aguirre told reporters Monday.

“I told the Speaker that I will constitute a team, a panel to study the technical as well as the legal status of this,” he added.

Aguirre said the panel will conduct a fact-finding investigation on the matter.

“I don’t think this will be difficult since there is already an opinion on this rendered during the previous administration, I think in 2014, by then Justice Secretary Leila de Lima,’ Aguirre said though he declined to disclose what was the opinion made by the previous DOJ chief.

Alvarez earlier filed a graft complaint against Floirendo before the Ombudsman accusing the latter of having an “unlawful business interest” while serving as an elected official.

He said that when the agreement between the BuCor and Tadeco was renewed in 2003 extending the deal for another 25 years, Floirendo was serving his second term as Davao del Norte representative and that there was no evidence that when it was signed, Floirendo divested himself of his ownership of shares of stock in Tadeco.

The original contract between the BuCor and Tadeco to utilize parts of the penal colony into a banana plantation was inked in 1969.

Both Alvarez and Floirendo are partymates and close friends of President Rodrigo Duterte.

Aside from being the Speaker, Alvarez is also the secretary general of the Partido Demokratiko Pilipino-Lakas ng Bayan while Floirendo is the top campaign contributor of Duterte in the 2016 presidential elections.

Alvarez also filed House Bill 867 calling for an inquiry on whether BuCor is getting its fair share of the profits of Tadeco. Floirendo has denied Alvarez’s claim, saying their feud started when the latter believed the rumors that he was behind the plot to replace the Speaker with Pampanga 2nd District Representative and former president Gloria Macapagal-Arroyo.