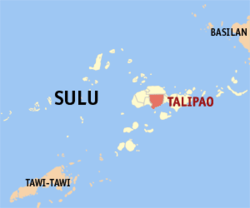 ZAMBOANGA CITY – At least 10 members of the Abu Sayyaf were killed while 32 government soldiers were wounded in a clash in Talipao, Sulu on Sunday.

Galvez said the troops hit the “biggest group,” but the bandits were in a better position compared to the government forces.

He said the government troops managed to use trees as cover but the bandits used an M203 grenade launcher, hitting the soldiers with splinters and shrapnel.

This caused the wounding of 32 members of the 41st IB, including its leader Lt. Col. William George Cordova, and another officer, Lt. Joemarie Landicho.

Galvez said 10 soldiers suffered bullet wounds, while 19 others were hit by shrapnel.

He said the bandits also suffered heavy casualties as the military delivered ground fire from 105 howitzers.

But the soldiers only recovered one body of a suspected bandit.

“They suffered heavy damage. On the ground, so many leaves of coconut and bananas were bloodied. They used these leaves to drag the bodies, and based on the number of bloodied leaves, they suffered heavily,” Galvez.  SFM/rga