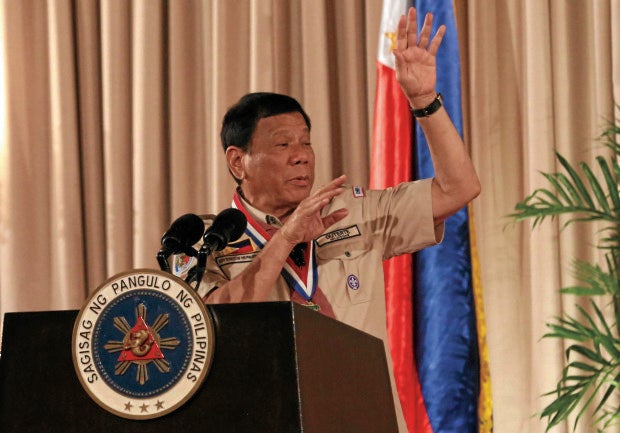 A bishop from Mindanao has joined fellow priests and lawmakers in criticizing President Rodrigo Duterte for his administration’s plan to appoint about 42,000 village chiefs and scrap altogether the barangay elections slated in October.

Kidapawan Bishop Jose Collin Bagaforo said the plan was proof that Duterte was slowly turning into what he called a “full-time dictator” in an attempt to silence the political opposition and supposedly to “legalize an autocratic government.”

“My comment on Duterte’s No Barangay Elections: if it is by appointments, Digong has now slowly metamorphosed into a full time dictator. With this plan, PDP is now to become FM’s KBL. This will erase any opposition party and the next is a legalize autocracy called federal parliamentary government. Beware of the triumvirate: Duterte-Pimentel-Alvarez!” Bagaforo said, referring to Senate President Aquilino “Koko” Pimentel III and Speaker Pantaleon Alvarez.

The administration is seeking to postpone barangay elections, claiming that 40 percent of officials in the country’s 42,028 barangays are either corrupt or into illegal drugs.

The government wants to appoint around 340,000 barangay chairs and council members instead of pushing through with the elections. But the Local Government Code of 1991, or Republic Act No. 7160, mandates that elections be held for the chairs and councilors of barangays.

But Bagaforo raised doubts on Duterte’s claim that 40 percent of barangay leaders were involved in illegal drugs. “Wonder if Liga ng Barangays consulted or referred to about issues on 40% of them are drug pushers/lords and on appointing instead of election?” the bishop added.

Earlier, Novaliches Bishop Emeritus Teodoro Bacani, member of the 1986 constitutional commission that drafted the 1987 Charter, warned that the administration’s plan to cancel the barangay polls would lead to a “creeping dictatorship.” JE/rga