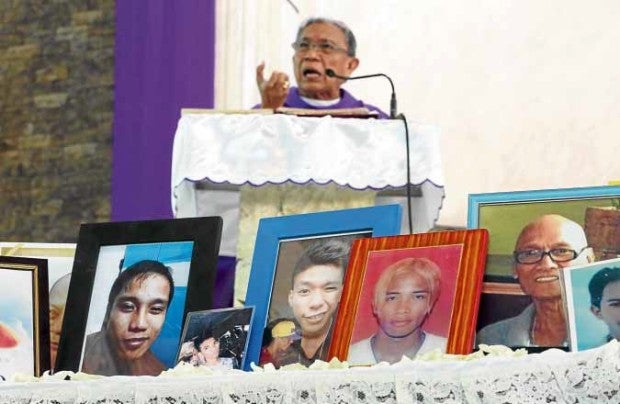 It doesn’t matter whether the number of victims is 4,000 or 7,000, or whether the victims were killed by police or by vigilantes, what is important is that extrajudicial killings in President Duterte’s war on drugs must stop, a Catholic bishop said on Sunday.

Manila newspapers variously report the total deaths in Mr. Duterte’s brutal crackdown on narcotics as more than 4,000, 7,000 and 8,000.

Of the total, 1,398 were confirmed drug-related homicide cases and 2,615 drug suspects killed by police in operations as of March 26, the PNP said last week.

The rest were “deaths under investigation,” the PNP said.

In a homily during Mass held in Sto. Niño Parish Church in Bagong Silang, Caloocan City, on Sunday for the victims of Mr. Duterte’s war on drugs, Novaliches Bishop Antonio Tobias said debating the number of deaths was pointless and that it did not matter whether the killers were police or vigilantes.

“The addicts who were killed, whether in what police call ‘deaths under investigation’ or ‘killed in police operations,’ whether 7,000 or 4,000, as police now say, all of them were victims of summary executions and extrajudicial killings,” Tobias said.

Instead of disputing the figures, Tobias said the police should do something to solve the killings.

“Who are we to say that these people should die?” Tobias said.

He said the government could use different terms to describe the deaths, but that would not change the fact that people were being killed in the war on drugs.

“It’s just a name but they’re still killings,” he said.

Human Rights Watch and Amnesty International have warned that the killings could amount to crimes against humanity and that officials behind the war on drugs could be held accountable.

In a video message to a United Nations Commission on Narcotic Drugs annual meeting in Vienna on March 16, Vice President Leni Robredo called attention to the increasing number of deaths in the war on drugs and reiterated her call for “greater transparency” in the crackdown.

Robredo also spoke about the reports that had reached her, including “palit-ulo,” where police take suspects’ relatives as hostages to force the suspects to surrender.

The PNP has denied the report, saying the tactic was not sanctioned.

Interior Secretary Ismael Sueno, overseer of the PNP, on Sunday said that the government would never sanction the tactic for its war on drugs.

Sueno said he had never received any complaints involving the alleged police tactic.

Sueno earlier called on Robredo to present proof of the alleged police tactic.

“It would help if Vice President Robredo presents to us solid proof [of] this so-called palit-ulo scheme so we can act on it immediately,” he said.

Robredo and Sueno will meet after Holy Week.

Sueno said no date had been set yet for the meeting.