MANILA — Supporters of President Duterte flocked to the Rizal Park in Manila, on Sunday, to denounce Vice President Leni Robredo for her allegedly inaccurate remarks, “wild accusations,” and “unfounded claims” against the Duterte administration’s war on drugs before a United Nations body.

Rally participants displayed banners and placards depicting Robredo with horns or as the mythological Medusa, and branding her as a traitor.

The rally, with the themes “Palit Bise” (Change the Vice President) and “Stop Shaming Duterte,” was peppered by anti-Robredo speeches and musical numbers by rappers and theatrical artists, which attracted Sunday park-goers.

Lopez said the Vice President “grossly misrepresented” the situation in the country in her video message before the UN Office on Drugs and Crime.

Lopez said Robredo’s remarks were politically motivated and orchestrated by her party, the Liberal Party, which he described as “treacherous and venomous,” and constantly plotting to overthrow Duterte.

Highlighting the role of the social media, the organizers and guests also posed for a “groupie” as they chanted “Stop shaming the Philippines.” Co-hosts Jimmy Bondoc even joked about the group being on stage just in case a bomb threat, made on Facebook by a Duterte critic, materialized.

One rapper, Arcadio Saavedra, sang about his challenge to one of Duterte’s critics, Sen. Antonio Trillanes IV, to a fistfight.

A blimp with Duterte’s face and slogan “Change is here” was also flown over the park, aweing children and kibitzers.

Eric Nicolas, one of the rally organizers, said they are leaving it up to the gathering’s multisectoral participants what kind of change they wanted.  He said the “change” could be merely change in attitude or replacement through impeachment. 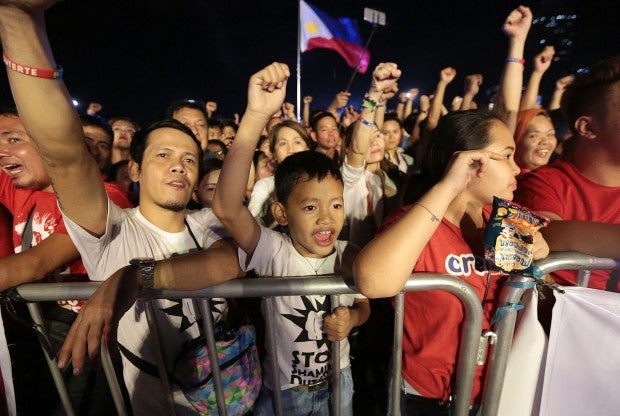 Nicolas also appealed to local and foreign media to be fair in writing about the Duterte administration’s programs, particularly the war on drugs.

“We are on our knees begging you, stop maligning our country. Stop lying about us. There are no dead bodies on the streets, only on your television screens,” he said.

Philippine Amusement and Gaming Corp. chair Andrea Domingo called on critics of the war on drugs to just help in removing addicts from the streets and rehabilitating them.

“What do you want our policemen to do, beg drug pushers and addicts [subjected to police operations] not to put up a fight?” she asked in a brief address.

Another Pagcor official, Carmen Pedrosa, called on the people to push the President’s advocacies not only in rallies but in their daily undertakings.

Videos of blogger Mocha Uson blasting Roberto for her “palit-ulo” remarks and Environment Secretary Gina Lopez expressing support to the President as a good and courageous man were also shown to the crowd.

Organizing parties also sent around their staff asking for signatures for a “declaration” calling on the President to suspend the 1987 Constitution and declare a revolutionary government.

The declaration called Duterte to vest himself with powers to change the system of the government from unitary to federal, to stop corruption in government and private sector, and go after drug and crime syndicates.  SFM