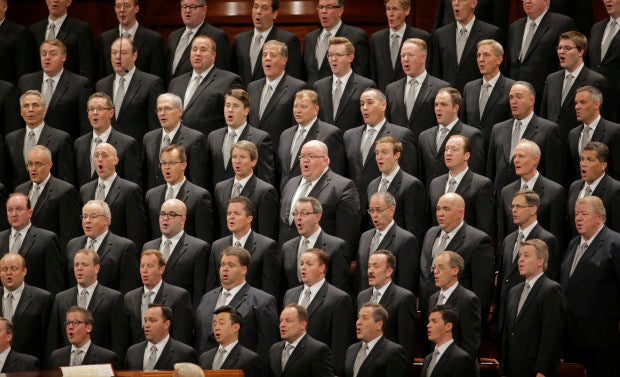 The Mormon Tabernacle Choir of The Church of Jesus Christ of Latter-day Saints sing in the Conference Center at the morning session of the two-day Mormon church conference Saturday, April 1, 2017, in Salt Lake City. Mormons will hear guidance and inspiration from the religion’s top leaders during a church conference this weekend in Salt Lake City as well as getting an update about church membership statistics. AP

SALT LAKE CITY, Utah, United States — Mormon leaders reminded church members Saturday about the importance of performing ceremonial baptisms on dead ancestors who didn’t receive the ordinance while alive — a practice unique to the faith that came under fire in the past from Jews when they discovered Holocaust victims were being baptized.

Henry Eyring told a worldwide audience during a twice-yearly Mormon conference in Salt Lake City that God wants all his children “home again, in families and in glory.” He encouraged listeners to use the religion’s massive genealogical database to trace their roots.

Ceremonial baptisms occur when a member brings an ancestor’s name to a temple. Mormons believe the ritual allows deceased people a way to the afterlife if they choose to accept what they see as an offering of love. The belief that families are sealed for eternity is one of the faith’s core tenets.

READ: Mormon choir member quits rather than sing for Trump

The practice is becoming more common because young church members have embraced it, said Eyring, a member of a top governing body of The Church of Jesus Christ of Latter-day Saints, called the Quorum of the Twelve Apostles.

“They have learned that this work saves not just the dead; it saves all of us,” Eyring said. “There are now many people who have accepted baptism in the spirit world. … This is the work of our generation.”

But ceremonial baptisms offend members of other religions, especially Jews, who became upset years ago when they discovered attempts by Mormons to alter the religion of Holocaust victims. They included Anne Frank, a Jewish teenager forced into hiding in Amsterdam during the Holocaust and killed in a concentration camp.

In the 1990s, after negotiations with Jewish leaders, the church agreed to end the ceremonial baptism of Holocaust victims. After it was revealed that they continued, Mormon leaders in 2012 spoke out against the practice and reminded the public that a virtual firewall was put in the database to block anyone who tried to access the names of people who died in the Holocaust.

Some early Christian groups may have engaged in a similar practice, but the Mormons are the only mainstream Christian faith that currently practices baptisms for the deceased, said Mormon scholar Matthew Bowman, an associate professor of history at Henderson State University.

The “proxy baptisms” also were mentioned Saturday at the conference in a speech by Russell M. Nelson, another member of the Quorum of the Twelve Apostles who is next in line to assume the church presidency. Nelson said Mormons who keep their covenants to Jesus Christ are given “Godly power.”

“God’s plan provides for those blessings to be extended to ancestors who died without an opportunity to obtain them during their mortal lives,” Nelson said.

Mark Bragg, a member of a secondary governing body, applauded the increase in baptisms for the deceased: “We are experiencing great joy and celebration on both sides of the veil.”

Their speeches came during the first day of a two-day conference in which leaders implored the faith’s 15.8 million members worldwide to be compassionate and devout while avoiding the many temptations of the modern world that can pull them away from their faith.

Nearly 100,000 church members are expected to attend five sessions on Saturday and Sunday. Thousands more around the world will listen to the conference or watch it on television, radio, satellite and internet broadcasts in 90 different languages.

Jeffrey Holland, a long-time member of the Quorum of the Twelve Apostles, said in a speech about inclusivity that there’s room in the faith for people of different “sexual attractions” if they love God and honor his commandments.

His remark marked the latest attempt by the faith to foster a climate of empathy for gays and lesbians while the religion still clings to fundamental doctrinal beliefs that homosexuality activity is a sin.

He said there’s room in the faith for all types of people, including from different cultures; those from different family structures; and those questioning their faith. Holland also encouraged church members to embrace their uniqueness.

“When we disparage our uniqueness or try to conform to fictitious stereotypes â stereotypes driven by an insatiable consumer culture and idealized beyond any possible realization by social media â  we lose the richness of tone and timbre that God intended when he created a world of diversity,” Holland said.

Dale Renlund, one of the newest members Quorum of the Twelve Apostles, told church members to guard against being intolerant of others with different opinions.

“We must not be guilty of persecuting anyone inside or outside the church,” Renlund said. “Church history gives ample evidence of our members being treated with hatred and bigotry. How ironically sad it would be if we were to treat others as we have been treated.” CBB/rga