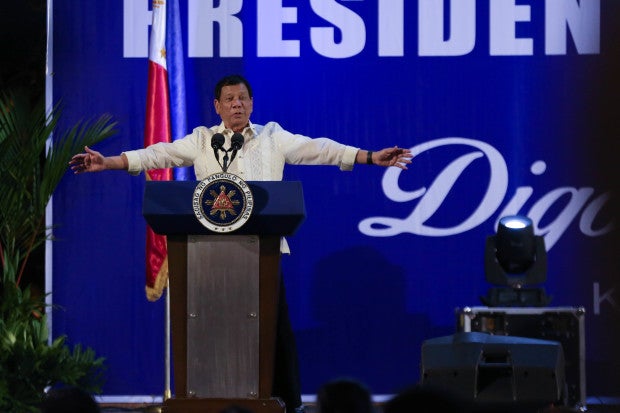 President Rodrigo Duterte gestures as he delivers his speech during the “Digong’s Day for Women” at the Kalayaan grounds in Malacañang on March 31, 2017. ALBERT ALCAIN/PRESIDENTIAL PHOTO

President Rodrigo Duterte has vowed to pardon and promote policemen charged with the murder of Albuera town Mayor Rolando Espinosa Sr. if they would be convicted.

Speaking at the “Digong’s Day for Women” event in Malacañang on Friday night, Duterte assured protection for policemen who followed his orders on his brutal war on illegal drugs.

(These cops in jail, I cannot abandon them, They just followed my order.)

The President said the policemen charged with murder should not worry of conviction because he was ready to grant them absolute pardon.

“But I tell the police now. Basta sinunod lang ninyo o ‘yung pinatay nitong mga p***** inang ito (If you just followed my order and killed this son of a b*tch). Why do you grieve for a son of a b****? He destroyed half of the Visayas,” he said.

Mayor Espinosa is the father of Kerwin Espinosa, said to be the biggest drug lord in Eastern Visayas.

“Maconvict? Ay walang problema (If they get convicted, there is no problem),” he added. “Pardon, o, ibigay mo sa judge. Ipabasa mo sa judge. O pardon pala kayo lahat (I will give the order of pardon to the judge and he will read it, ‘you have just been pardoned’). O, restored to full and political, civil rights. And reinstated order with the promotion one rank higher.”

The chief executive defended his move, saying “the President can pardon either conditional or absolute a convicted criminal or grant amnesty with the concurrence of Congress under the Constitution.”

In a speech in Socorro, Mindoro on Thursday, Duterte also made the same promise to pardon the policemen if they would be found guilty.

The President has earlier said he would rather believe the police version on the killing of Espinosa even after the Department of Justice (DOJ) has indicted the policemen involved in the murder of Espinosa.

Supt. Marvin Marcos and 18 other policemen were arrested, facing murder charges for the killing of Espinosa and another inmate during a raid in his cell at a Leyte sub-provincial jail on November  5.