Relic of St. John Paul II up for public veneration

Public veneration of a first class blood relic of Saint Pope John Paul II is scheduled next week at the Our Lady of Veritas chapel in Quezon City.

In a statement, the Church-run Radio Veritas is inviting devotees to venerate the “Ex-Sanguine” (from his blood) first class relic from March 31 to April 7, from 8 a.m. to 5 p.m.

This is in commemoration of the saint’s 12th death anniversary on April 2.

The popular Saint Pope John Paul II was the Pontiff for 27 years—from 1978 to 2005, making him the second longest-serving Pope in modern history after Pope Pius IX.

A vocal advocate of human rights, he was made a cardinal by Pope Paul VI in 1967, and was the first non-Italian Pope in more than 400 years.

He was also the most widely traveled Pope in history, visiting 129 countries during his pontificate.

He visited the Philippines twice: in February 1981, when he beatified the first Filipino martyr, Saint Lorenzo Ruiz; and in January 1995 during the World Youth Day. 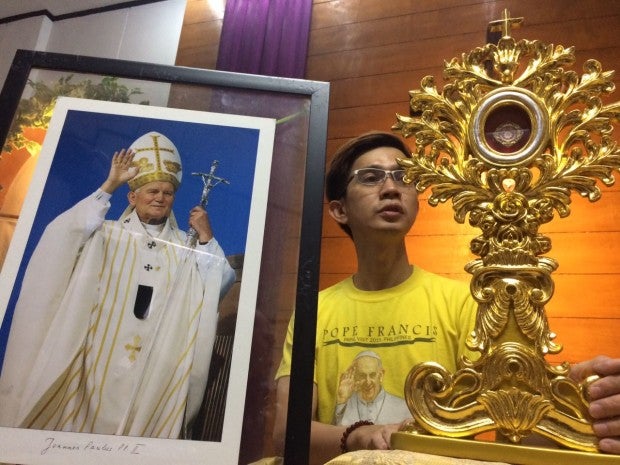 The first class blood relic of Saint Pope John Paul II is at the Our Lady of Veritas chapel in Quezon City in commemoration of the saint’s 12th death anniversary on April 2.
NIÑO JESUS ORBETA / Philippine Daily Inquirer

He was canonized on April 27, 2014, again a Divine Mercy Sunday, together with Pope John XXIII.

He is the patron saint of World Youth Day and the World Meeting of Families, with his feast day celebrated on the anniversary of his papal inauguration on Oct. 22.