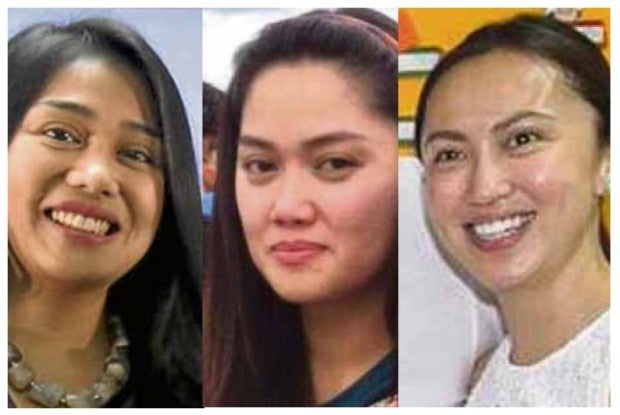 The women are standing by their men, even as speculations swirl about the graft charges filed by Speaker Pantaleon Alvarez against Davao del Norte Rep. Antonio Floirendo Jr. for alleged conflict of interest in the latter’s lease of government land for his banana company.

Alvarez’s daughter, Assistant Finance Secretary Paola Alvarez, on Thursday expressed “shock” at what she described as the “crass and juvenile … spin” on the graft issue by Floirendo’s live-in partner, Cathy Binag.

Binag had earlier said that the crack in the relationship between the two formidable allies of President Rodrigo Duterte started when Alvarez’s wife, Emily, and their children, ran to them for help over the Speaker’s womanizing.

Floirendo’s partner added that a public spat she had with Alvarez’s girlfriend, Jennifer Maliwanag Vicencio, during the Masskara Festival in Bacolod City in October last year further soured the two friends’ relationship.

But the younger Alvarez disputed this and said in a statement that it was “incredible how personal relationships are exploited by Rep. Tonyboy (Floirendo), to twist an otherwise simple question of facts. It’s completely appalling!”

Alvarez said her family wished to keep their personal lives private in spite of her and her father’s positions in government.

“I hope Ms Binag will respect that and stop dragging us into her personal issues,” she added.

Binag, in an apparent reply to the younger Alvarez’s statement, said: “Let me make it clear that my earlier statement that the problem between my partner, Representative Floirendo, and his erstwhile friend, Speaker Alvarez, started with me and the Speaker’s girlfriend is true.”

But she maintained that she would not know if her altercation with Vicencio had triggered the filing of the graft case.

“I find it petty for some mature men to be burning bridges of friendship over a girls’ spat,” she added.

Binag also apologized to the Alvarez family, saying she “never intended to hurt them … because I know where they are coming from. Truth will set us all free.”

In a Facebook chat, Binag told the Inquirer that everything was now fine between her and the Speaker’s daughter.

Speaker Alvarez has admitted being estranged from his wife and having an affair and dared his critics to file a case against him if they see ethical issues about the affair.

“D’yos ko naman, kayo naman. Sino bang walang girlfriend (My God, come on. Who doesn’t have  a girlfriend)?” he told House reporters in a phone-patch interview on Thursday.

Alvarez initially refused to answer questions about his extramarital affair, but relented when asked to comment on the possibility of an ethics case being raised against him.

“If they see ethical issues, then go ahead, file a case. No lawyers will be left,” the Speaker said, suggesting in jest that all lawyers had affairs.

Alvarez also admitted being long estranged from his wife, Emelita Apostol, with whom he has four children. He has two other children from a first marriage.

Floirendo and Alvarez were close friends until they had a falling-out after rumors circulated that the former was plotting to oust the Speaker and replace him with former President and now Pampanga Rep. Gloria Macapagal-Arroyo.

In his complaint dated March 13, Alvarez questioned the joint venture agreement (JVA) first entered into by Floirendo’s Tagum Agricultural Development Corp. (Tadeco)  and the Bureau of Corrections (BuCor) in 1969, which was extended for another 25 years on May 21, 2003.

In a statement released on Thursday, the Speaker said the government “will lose an estimated P25 billion from the lopsided joint venture agreement that has Tadeco paying BuCor P26.541 million per year or P663.525 million from 2003 to 2028.”

Alvarez said plantations with the same development scale would fetch as much as P200,000 per hectare instead of the P5,000 paid by Tadeco.

Earlier, Alvarez said Floirendo had violated Section 3(h) of the Anti-Graft and Corrupt Practices Act because in 2003, he was serving his second term as a district representative. The Speaker has also sought a congressional inquiry on the issue.

Floirendo, who said he had yet to receive a copy of the complaint, said he “will face this case with clean hands and I am positive that the allegations therein will easily be disproved,” he said.

The congressman also denied having a hand in the reported ouster moves against Alvarez.

“I am 100 percent not a part of it,”  said Floirendo, who contributed P75 million in campaign funds to President Duterte’s presidential bid,  a fifth of the President’s  P376-million campaign kitty.

Alvarez’s extramarital affair had netizens describing him as a “hypocrite” for his hard-line stance against Sen. Leila de Lima and her affair with her driver during the House hearing on drug charges against her.

But the Speaker denied being inconsistent in his stand on the issue. He “never condemned” the senator’s affair with a married man, Alvarez said.