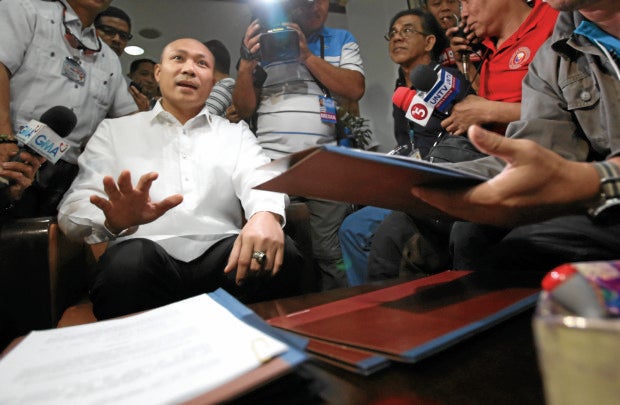 Magdalo Rep. Gary Alejano on Thursday filed supplementary charges to his impeachment complaint against President rodrigo Duterte, accusing him of taking a “defeatist stance” by doing nothing to challenge China’s activities on Benham Rise and in the West Philippine Sea.

In a 12-page affidavit, the opposition congressman said Mr. Duterte had made a slew of remarks that proved he had no intention to protect Philippine sovereignty and had alienated key allies like the United States through “rants and unstoppable outbursts.”

Alejano alleged that Mr. Duterte betrayed the public trust and violated the 1987 Constitution by refusing to challenge China’s incursions into  Philippine territory, including Benham Rise, an underwater landmass off the eastern coast of Luzon that the United Nations declared in 2012 part of the Philippines’ continental shelf.

The former Marine captain accused Mr. Duterte of “inaction” and dereliction of his duty to assert the country’s sovereign and maritime rights and territorial claims to Panatag Shoal and islands in the West Philippine Sea—waters within the Philippines’ 370-kilometer exclusive economic zone (EEZ) in the South China Sea—and Benham Rise.

The complaint adds to a laundry list of what Alejano says are impeachable offenses that amount to high crimes, abuse of power and betrayal of public trust.

Alejano submitted the initial complaint two weeks ago, just as Congress went into recess, a move aimed at keeping it in the public spotlight and preventing Mr. Duterte’s allies in the House from dismissing it right away.

Congress resumes sessions on May 2.

Mr. Duterte is frequently accused of abuse of power, though none of the allegations has so far stuck.

Chief Presidential Legal Counsel Salvador Panelo said on Thursday that Alejano’s additional complaint was “nonsense” and only intended to generate propaganda and publicity for Alejano.

Alejano said Mr. Duterte had failed to act on a ruling by the UN-backed Permanent Court of Arbitration in The Hague last year that invalidated China’s claim to almost all of the South China Sea, its justification for bulding artificial islands on reefs within the Philippines’ EEZ.

“President Duterte, through his actions and pronouncements, has continued to ignore our national interest and has refused to act on urgent security matters brought by the alarming activities of China in the West Philippine Sea and [on] Benham Rise, apparently, because he is afraid to offend his Chinese friends,” Alejano said.

He said Mr. Duterte’s pronouncement that he could not and would not stop China from building on Panatag Shoal because China was too powerful indicated his unwillingness to defend the country’s rights.

Alejano also cited Mr.  Duterte’s giving China permission to send survey ships to Benham Rise without the knowledge of the Department of National Defense and Department of Foreign Affairs (DFA).

It was not clear what the ships were doing in the area.

Acting Foreign Secretary Enrique Manalo told a television interview on Thursday that the DFA, after the presence of Chinese ships on Benham Rise was reported, sent a diplomatic note to China to inquire what they were doing there.

“China replied that number one, they fully respect and recognize sovereign rights of the Philippines on Benham Rise and, [number two], it is not an area under dispute,” Manalo said, adding that the DFA was satisfied with China’s explanation.

He said China wanted to survey Benham Rise for resources but did not want to involve Filipino scientists as observers.

For that reason, the DFA rejected China’s requests for survey permits, he said.

Some requests from China are still pending, Manalo said.

He also said the Philippines would ask China to clarify its intentions in building structures on Kagitingan, Zamora and Panganiban reefs in the Spratly archipelago during bilateral talks in May.

“We would have to ask what is the intention in building these [structures], because these can be used for civilian or military [purposes]. That’s why we have to seek clarification on what is this all about,” he said.

National Security Adviser Hermogenes Esperon told reporters on Wednesday that the government was aware of China’s buildup but could not do anything about it.

“What do you want us to do, attack the facility?” Esperon told reporters after attending a Senate hearing on a proposed development authority for Benham Rise.

Majority Leader Rodolfo Fariñas sees Alejano’s supplemental complaint as problematic. Sought for comment on Thursday, he questioned whether the House of Representatives should accept it at all.

“But under our rules on impeachment, the other party may not be required to answer at all since the justice committee has the power to dismiss the complaint due to insufficiency of form or substance, subject to the approval of the plenary body,” he said.

“Only when these two requirements are met that the official sought to be impeached [will] be required to submit a verified answer. Thus, it would be unfair to allow a supplemental or amended complaint to add another cause of action to the original complaint or make [it] sufficient in form or substance,” he added.

Panelo said Alejano’s supplemental complaint could even be dismissed on a technicality, because under the Constitution, only one impeachment complaint could be brought against the same official in one year.

In his initial complaint, Alejano accused Mr. Duterte of  mass murder for the deaths of more 8,000 drug suspects in his brutal war on drugs, and of amassing P2.2 billion in unexplained wealth, among other high crimes.

Alejano, in a press briefing after filing his supplemental affidavit, said he believed the impeachment of Mr. Duterte could gain traction in the House with the very public spat between Speaker Pantaleon Alvarez and Davao del Norte Rep. Antonio Floirendo Jr. —WITH REPORTS FROM LEILA B. SALAVERRIA, YUJI VINCENT GONZALES AND THE WIRES