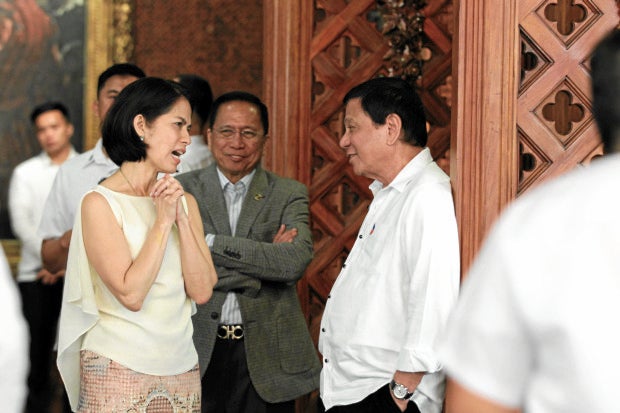 President Rodrigo Roa Duterte speaks with Environment Secretary Regina Lopez before the start of the National Economic and Development Authority (NEDA) Board Meeting at the Malacañan Palace on Feb. 20, 2017. Also in the photo is Presidential Adviser on the Peace Process Secretary Jesus Dureza. (PHOTO by KING RODRIGUEZ/PRESIDENTIAL PHOTOGRAPHERS DIVISION)

MANILA — In the raging debate on the mining industry, an anti-mining group has urged President Duterte and the Commission on Appointments (CA) to keep an eye on politicians with possible “conflicts of interest.”

Ten of the mining firms served with show-cause orders are linked to influential businessmen and politicians, according to the ATM. “We surmise that these are the same powers that are blocking our reform initiatives” in the mining industry, including Lopez’ confirmation as Cabinet secretary, said ATM national coordinator Jaybee Garganera.

Chief of the ATM’s findings were Finance Secretary Carlos Dominguez’ links to Alsons, for which he served as director from 1995 to 2016. Alsons owns stocks in holding company and mining contractor Indophil Resources, now involved in the suspended Tampakan Mining Project, according to the ATM. Alsons is still chaired by Dominguez’s brother Paul Dominguez.

The ATM also took note of the mining links of Sen. Cynthia Villar, chair of the Senate committee on environment and natural resources, and committee on agriculture.  Prime Asset Ventures Inc., parent company of Kingking Mining Corp. and TVI Resources Develpment Phils. Inc., is owned by Villar’s son, Manuel Paolo Villar, according to ATM. Social Security Commissioner Michael Regino also sits in the TVI board, the ATM has said.

1-Pacman partylist Rep. Michael Romero, meanwhile, is chair and president of 168 Ferrum Pacific Mining, according to the ATM.

Garganera urged Duterte, the final arbiter on Lopez’ earlier order to close 23 mining firms, and the Commission on Appointments, which would decide on Lopez’ confirmation, to consider the “beneficial ownership” of these mining firms, and beyond government officials’ disavowals of direct ownership, such as Dominguez’ divesting from Alsons.

“That could be indirect benefits, like when your campaign contribution was coursed through those individuals, or they lent you use of their helicopters,” Garganera noted.

“It is this ‘beneficial ownership,’ which is not shown in government documents, which should be pinned down,” Garganera said. “They should be held accountable for that. In the meantime, that is also conflict of interest,” he added.