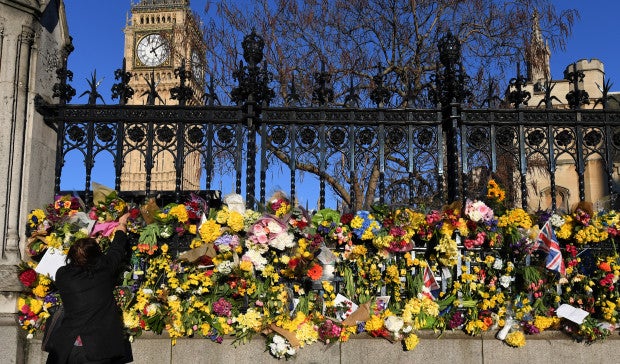 A wellwisher lays flowers outside the Houses of Parliament, following the March 22 attack by Khalid Masood, killing 4, and injuring 29, in London on March 25, 2017. Tens of thousands of pro-EU protesters took to London’s streets Saturday, in defiance of the terror threat, to mark the bloc’s 60th anniversary just days before Brexit begins. Britain will launch the process of leaving the European Union on March 29, setting a historic and uncharted course to become the first country to withdraw from the bloc by March 2019. AFP

Britain will Thursday begin the messy task of disentangling itself from EU laws, as the first signs of rancor between London and Brussels emerged at the start of their two-year divorce proceedings.

As some of the EU’s top leaders gathered to flesh out their strategy for the hard talks ahead, Britain was to publish its plan to extricate itself from four decades of European regulation.

European Commission head Jean-Claude Juncker urged the remaining 27 EU nations to pull together as the bloc reels from the blow of one of its biggest members becoming the first ever state to announce its withdrawal from the 60-year-old union.

The first signs of discord were already emerging as a row developed over what was perceived as a veiled threat by London that cooperation over EU security would be endangered if there was no deal.

The European Parliament’s chief negotiator, Guy Verhofstadt hit back immediately saying that “citizens’ security was far too serious a subject” to be held hostage to the negotiations.

And the path ahead is strewn with obstacles, with the matter of three million EU citizens living in Britain and one million British people within the bloc’s nations top of leaders’ agenda.

Also looming large over negotiations is the so-called “exit bill” Britain will have to pay, estimated to be as much as 60 billion euros ($64 billion, £52 billion).

But before these talks can even get under way, MPs will begin the task of amending or scrapping EU regulation as it is brought into British law.

Prime Minister Theresa May told parliament on Wednesday that this was important “so that on the day we leave everybody knows those rules still apply and everybody knows where they stand”.

‘We already miss you’

Analysts said the tone of Wednesday’s historic announcement and the EU’s initial reaction was largely conciliatory.

In a letter setting out Britain’s position, May stressed she wanted to “remain committed partners and allies to our friends across the continent” and to forge a “deep and special relationship” with the rest of the bloc.

On the other side of the Channel, powerhouse leader Merkel called for “fair and constructive” negotiations and a gloomy Tusk said: “We already miss you.”

However, the battle lines were being drawn up, with Merkel dismissing Britain’s wish to have exit negotiations run concurrently with talks on its future relationship with the EU.

And many observers highlighted what was seen as May’s threat on security.

“May threat to EU terror pact,” ran the headline in The Times daily after she wrote in the letter that “in security terms, a failure to reach agreement would mean our cooperation in the fight against crime and terrorism would be weakened.”

While May asserted in January that “no deal is better than a bad deal”, in her Brexit letter she adopted a more conciliatory tone and called for Britain and the EU to “work hard” to avoid failure in the negotiations.

The cliff edge scenario of Britain leaving the European bloc with no deal has alarmed business leaders, who have also emphasised the need for a transitional arrangement to allow for the divorce deal to be gradually implemented.

Tusk is due to issue draft “negotiating guidelines” on Friday and leaders of the 27 remaining EU countries will hold a special summit on April 29 to rubber stamp the plans.

While the bloc has tried to show a united front in the face of Brexit, celebrating the EU’s 60th anniversary earlier this month, in Britain the prime minister is struggling to unite her own country.

Britons last year voted 52 percent to 48 percent in favour of Brexit, leaving the country bitterly divided with tens of thousands of pro-EU protesters marching in London on Saturday.

The referendum result has also led to a resurgence of Scotland’s independence campaign, after Scots voted to stay in the EU but were outnumbered nationwide.

The Telegraph, meanwhile, described Brexit as “A magnificent moment” on its front page, quoting Foreign Minister Boris Johnson who played an instrumental role in the leave campaign.

“We have every reason, in reality, to be brimming with confidence,” Johnson wrote in the newspaper./rga