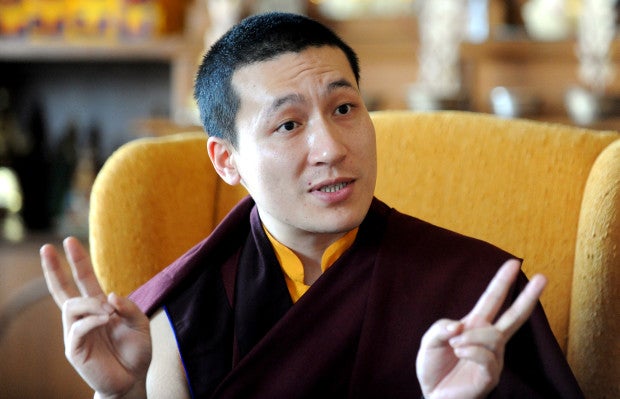 In a photograph taken on March 2, 2012, Tibetan Leader Thaye Dorje gestures during an interview with AFP in New Delhi. Thaye Dorje was only 18 months old when, according to his biographers, he began telling people he was the reincarnation of one of Tibetan Buddhism’s most influential leaders, the Karmapa Lama. AFP PHOTO

A senior Tibetan lama at the center of a long-running row over one of Buddhism’s most important titles has abandoned the monkhood altogether after marrying a childhood friend in India, his office said Thursday.

Thaye Dorje, 33, has claimed since childhood to be the reincarnation of the Karmapa Lama, the leader of one of the four major schools of Tibetan Buddhism.

But many adherents of the Karma Kagyu school of Buddhism follow another monk with a rival claim to the title, Urgyen Trinley, who is also recognized by the Dalai Lama.

The disagreement has long split Tibetan Buddhists, but on Thursday Thaye Dorje’s office made the surprise announcement that he had married in a private ceremony in New Delhi on March 25, and abandoned the monkhood.

“I have a strong feeling, deep within my heart, that my decision to marry will have a positive impact not only for me, but also for the lineage,” the statement quoted Thaye Dorje as saying.

“Something beautiful, something beneficial will emerge, for all of us.”

His new wife, 36-year-old Rinchen Yangzom, was born in Bhutan and educated in India and Europe, the statement said.

Thaye Dorje was born in Tibet and his own father was a high lama, while his mother was descended from Tibetan nobility.

According to his official biography, he was just one-and-a-half years old when he started telling people that he was the Karmapa.

Under Tibetan tradition, monks identify a young boy who shows signs he is a reincarnation of a late leader.

In a 2012 interview he told AFP the disagreement over the Karmapa title “tests one’s courage in terms of devotion.”

The Karmapa Lama is not the only senior Tibetan Buddhist title to be disputed.

In 1995, China’s atheist government picked a young boy to be the Panchen Lama — a role already filled by another boy chosen by the Dalai Lama.

The Dalai Lama’s choice was detained by Chinese authorities at the age of six and has not been seen since.

The Panchen Lama traditionally plays a significant role in the choice of the Dalai Lama’s successor.

But China’s officially atheist Communist Party has repeatedly said it has the right to control the process of reincarnation and many Tibetan Buddhists fear Beijing  may seek to impose their choice of spiritual leader./rga

Tibet after the Dalai Lama

Dalai Lama: ‘I have no worries’ about Trump’s election

Read Next
More ‘rent-tangay’ scam victims come forward
EDITORS' PICK
Disease expert: Omicron variant may behave like Delta
Palace: Malls, establishments may require customers to use of face shields
This new condo in the South will make you want to turn a new leaf
Smart offers wireless fiber-like speeds to Filipino homes with country’s first 5G Prepaid Home WiFi
Syringes for Pfizer vaccine arriving on December 2 — NVOC chairperson
Legarda: Ending Violence Against Women, a cause for all
MOST READ
Bongbong Marcos to face another disqualification case
Christine Bersola, Julius Babao cleared of cancer after colonoscopy, endoscopy
Former PM Abe says Japan, US could not stand by if China attacked Taiwan
Tropical storm intensifies as it approaches PAR
Don't miss out on the latest news and information.